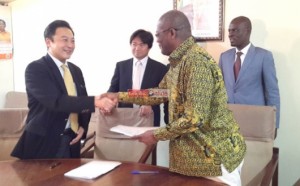 Ghana’s Ministry of Trade and Industry and Japanese company, Marubeni Corporation have signed a memorandum of understanding concerning the establishment of a sugar complex at Savelugu in the Northern region.

The complex, which is expected to cover between 10,000 to 30,000 hectares of land, will include a sugar estate and a sugar plantation.

Under the agreement, the Ghana Government will be responsible for funding the front end engineering design for the agricultural estate, conduct the environmental impact assessment, and also facilitate the acquisition of land and permits while the Japanese company is expected to facilitate the funding arrangement for both the sugar estate and the sugar plantation.

The implementation of the MoU is also expected to span 15 months.

The project to establish a sugar complex in the Northern Region has been on the drawing board since 2003.

Consistent with its vision, the government has used the platform offered by Tokyo International Conference on African Development (TICAD) to court the Japanese investors to work in partnership with Ghana towards the realisation of the project.

Speaking at the signing ceremony in Accra, the Minister of Trade and Industry, Mr Haruna Iddrisu, lauded the effort of the people of Japan for expressing interest in the establishment of the sugar estate and sugar plantation.

Ghana currently spends $173million annually on sugar importation and Mr Iddrisu stated that after the completion of the project, the country will become a producer for domestic consumption and a potential exporter of the product.

He, therefore, assured them the government’s religious commitment to support the project and ensure that the factory was established to improve the livelihood of the people.

In his remarks, the Regional Chief Executive Officer for Middle East and Africa for Marubeni Corporation, Mr Masakau Kuramoto, said the sugar plantation, when realised, would increase economic growth for Ghanaians.

“It will reduce the import of sugar into the country and also create job opportunities for the people in the northern sector,” he said.