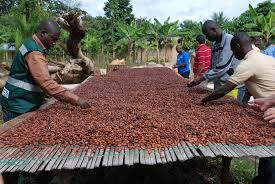 The cocoa regulators of the world’s two biggest producers are in talks with the African Development Bank about a $1.2 billion loan that will be used to increase output and mitigate against volatile prices, according to two people familiar with the matter.

Ivory Coast and Ghana want to build storage facilities for local processing and for the storing and release of stocks based on market demand, said the people, who asked not to be identified because they’re not authorized to speak about the matter.

The West African neighbours also want to pay farmers who need to replace old and diseased trees in order to boost output, the people said.

The initiative comes after Ivory Coast and Ghana said in May they will work together to derive more value from growing beans after a slump in prices cut government revenue and incomes for hundreds of thousands of small-scale farmers.

Cocoa futures in London fell last month to near the lowest in four years as a rebound in production leaves the global market oversupplied.

Ivory Coast, the top grower, had to reduce the price paid to farmers by 36 percent for the smaller harvest that started in April and trimmed its 2017 budget. Ghana lost almost $1 billion in export earnings because of lower prices, Joseph Boahen Aidoo, the chief executive officer of the country’s cocoa regulator, said in April.
bloomberg