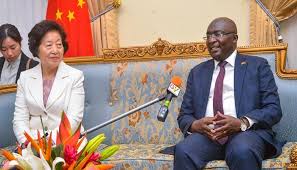 Ghana has received 300 million Yuan grant and 250 million Yuan debt write-off from the People’s Republic of China, as part of efforts to boost the nation’s infrastructural development.

Additionally, the rest of the $649 million being the first tranche of the Sinohydro Bauxite Barter Arrangement between the Chinese engineering and construction firm, Sinohydro Group Limited and Ghana Government has been approved by Sinosure, a Chinese credit and insurance firm, and expected in March, next year.

The governments of Ghana and China entered into a $2 billion Bauxite Barter Arrangement, when Vice President Bawumia led a government delegation to China in 2018.

Vice President Bawumia also lauded the Chinese government for funding the construction of technical and vocational institutions in Ghana.

He expressed Government’s commitment to learn from the Chinese government’s human skill development model, in order to stimulate socio-economic growth in Ghana.

He lauded China for celebrating its 70th anniversary recently and believed the high-level visit by the Chinese Premier would move the relations between the two nations a notch higher.

For her part, the Chinese Vice Premier applauded the government of Ghana for the warm hospitality accorded her and the Chinese Delegation upon their arrival in Accra on Sunday, November 10.

She lauded President Akufo-Addo-led government for implementing various development initiatives under the “Ghana Beyond Aid” Agenda, including; the One-District, One Factory and Planting for Food and Jobs that stimulated Ghana’s economic growth, making her one of the fastest growing economies in Africa and the world

She noted that her visit would afford the two nations to plan towards implementing the Consensus reached at the Forum on China-Africa Cooperation (FOCAC) held in September 2018.