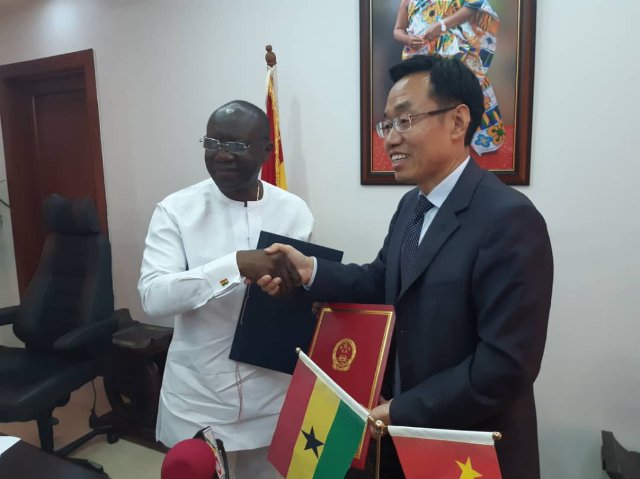 Ghana and China have signed a grant agreement for US$42.62 million for the implementation of economic and technical projects to be agreed on by the two sides for their mutual benefit.

Commenting, Mr Ofori-Atta acknowledged the immense support of the Chinese government to Ghana over the years, especially in the areas of infrastructure, ICT, trade and investment, tourism and education, including Technical Vocational Education and Training.

He said government in the last three years has created an enabling environment for the private sector to flourish.

“We have introduced tax reforms, inflation is on the decline, interest rates are on the decline, and the exchange rate has also been relatively stable,” Mr Ofori-Atta said.

The Minister said the government’s fiscal consolidation efforts over the period have also yielded positive results with fiscal deficit declining from 6.5 percent of GDP in 2016 to 4.5 percent currently.

“We are hopeful that sustained improvements in the management of the economy will surely galvanise all the elements necessary for sustaining rapid economic growth and development of the country.

Our primary focus now is on consolidating these gains achieved so far by improving macroeconomic stability and building an inclusive society through a wide range of broad-based government flagship programmes,” Mr Ofori-Atta.

Mr Ofori-Atta said the future prospects of Ghana-China Cooperation looked bright, especially with the recent signing of the Africa Continental Free Trade Agreement and Ghana as the host country of the Secretariat.

On his part, Mr Shi Ting Wang said under the eight initiatives of the Beijing Summit it would contribute its quota to the goal of Ghana beyond Aid.

He pledged to work closely with government to bring a better life to Ghanaians, adding that the prospects for cooperation between China and Ghana would be broadened.