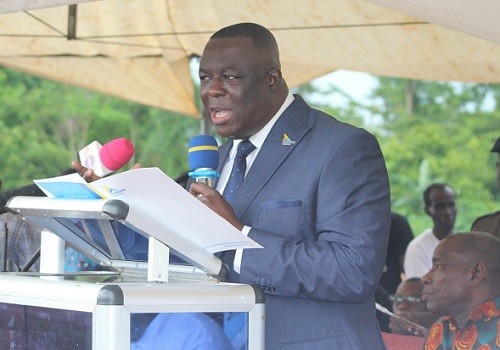 The Ghana Export-Import Bank (GEXIM) has for the past three years disbursed GH¢800 million to support 84 one-district, one-factory (1D1F) projects and other initiatives aimed at boosting the local economy.

The Chief Executive Officer (CEO) of GEXIM, Mr Lawrence Agyinsam, who disclosed this in an interview with the Daily Graphic, said some of the factories had been completed while others were at various stages of completion.

He explained that some of the factories were started from scratch while existing but distressed companies had also been supported to be on their feet.

“About 74 of the factories are new, only 10 were existing and had to be supported to boost their production capacity. With the new ones, they are located across the country. Some are complete while some are between 80 and 90 per cent complete,” he said.

Mr Agyinsam explained further that part of the funds had been channelled into what he described as “the seven legacy projects”.

“Legacy projects under the 1D1F are projects that cost above $10 million and some of these include the Walewale Water Melon Factory; Casa de Ropa; the Ekumfi Fruits and Juice Factory; Akuapem Gold; Juice and Mango in the Ashanti Region and Brick and Lime.

“These are projects that started in the era of the current government and they are strategically located,” he said.

Mr Agyinsam said the poultry industry was one of the critical investment areas for GEXIM.

He said the bank had committed resources to revamp 10 companies in the poultry value chain that were on the verge of collapsing because of challenges in the sector.

As I speak now, we still import $600 million worth of poultry products into this country and it is shameful that for a country of 30 million people, we continue to depend so much on imported chicken,” he said.

He stressed that it was about time priority was placed on local poultry production since that was one of the ways to create jobs and meet local demand for chicken.

He noted that if the investment in those focus areas began to yield fruits, the country would be on its way to self-reliance.

Mr Agyinsam observed that GEXIM was aware of its critical role in the realisation of the Ghana Beyond Aid (GBA) agenda and would not renege on that mandate.

He added that lessons drawn from the novel coronavirus disease (COVID-19) showed that the way forward to achieving a GBA was to invest in the local economy.