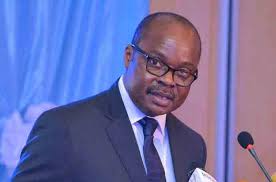 Governor of the Bank of Ghana, Dr. Ernest Addison, has been appointed Chairman of the Board of Governors of IMF and the World Bank Group.

Chief Executive Officer of the Ghana Investment Promotion Centre, Yofi Grant, congratulated him in a tweet on Saturday, October, 19.

The tweet which has since been liked by British High Commissioner to Ghana, Iain Walker reads:

“Governor of Bank of Ghana elected 2020 Chairman of the Board of Governors of IMF and the World Bank Group. He will preside over the 2020 plenary and other committee responsibilities. Congrats, another feather in Ghana’s cap. Ghana on the Go… no looking back”

Dr. Addison takes over from Aiyaz Sayed-Khaiyum who is the Fijian Attorney-General and the Minister for Economy, Civil Service and Communications.

The Central Bank’s governor was part of a delegation led by Finance Minister Ken Ofori Atta to the IMF/World Bank Annual Meetings held in Washington DC, from October 14 to 20, 2019.

The Board of Governors is the highest decision-making body of the IMF. It consists of one governor and one alternate governor for each member country. The governor is appointed by the member country and is usually the minister of finance or the head of the central bank.

While the Board of Governors has delegated most of its powers to the IMF’s Executive Board, it retains the right to approve quota increases, special drawing right (SDR) allocations, the admittance of new members, compulsory withdrawal of members, and amendments to the Articles of Agreement and By-Laws.