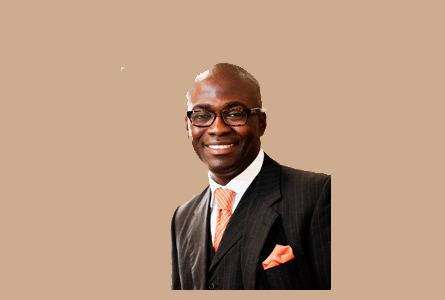 Oxford & Beaumont is some distance from what your idea of what a law firm is. It’s run from an impressive suite of offices in the Ghana College of Physicians & Surgeons building in a manner closer to a conventional business than is usually the case. For instance, in January 2010, it became the first Ghanaian law firm to employ a full time head of Human Resources.

Why this is important becomes clear when you speak to Elikem Nutifafa Kuenyehia,the entrepreneurial guiding spirit of the operation. Mr Kuenyehia, an Oxford and Kellogg alumnus, is a firm believer in talent and has taken the time and effort to assemble a dedicated team that have built and maintained the firm’s stellar reputation. Hence, the aforementioned Associate Director of Talent Management and Strategy. Or Human Resource Manager to you.

To Mr Kuenyehia, it’s the people who make the firm: “the amazing men and women who make up the team and pour their hearts every single day into making Oxford & Beaumont a better place for ourselves first and then for our clients.”

Woven around this core of talent and dedication is a culture of fastidiousness that allows for nothing but the best. Mr Kuenyehia describes this as a “high level of dissatisfaction.”

“At the heart of our culture is the notion of dissatisfaction. We require our team members to have a high level of dissatisfaction, a “high D”. By definition high achievers with a “high D” are never happy with the status quo; they constantly challenge.  Rather than pat ourselves on the back frequently, we are inspired by the words of Kwasi Twum [Chief Executive Officer of media behemoth, Multimedia Group] that ‘yesterday is history, it is tomorrow that counts’.
“The other key pillar to our culture is ‘leadership by listening; management by debate’. Apart from our values, we have no sacred cows. The partners are typically willing to discuss matters that affect the firm with team members irrespective of hierarchy or position.”

Typically, Mr Kuenyehia avoids the media; this is his first interview with any magazine or newspaper in the country. He has quietly built a formidable firm, now home to a team of almost  forty, and well-respected in legal circles – an impressive feat, considering that the firm was only founded in 2006.

However, the six years have not been without event. In May 2010 Oxford & Beaumont was jolted by the loss, of Nutifafa Klutse-Woanyah, its first associate. “He was the brightest lawyer [I] have ever come across,” Mr Kuenyehia recalls.

“It was one of the most difficult periods in our firm’s history and for me personally. Nutifafa had shared an office with me in all the four years he was at Oxford & Beaumont and the entire firm relied on his huge brain and capacity for hard work. I relied almost exclusively on Nutifafa in the transactions I was involved in. As a pioneer staff he was vested in where we were as a firm and shared the firm’s vision. I had never ever considered the future of the firm without Nutifafa and when I learnt of his demise I was not sure the firm or I could survive without him. Thanks to the structures he helped us put in place though, we continue to thrive but we are conscious of his legacy and grateful that he spent the time that he did with the firm in its  formative years.”

Oxford & Beaumont’s growth and evolving culture mirror the evolution of its Managing Partner, Mr Kuenyehia. He explains that the culture he sought to and has successfully shaped is the result of his experiences prior to setting up the firm.

“From UBA, I took the ‘can-do’ attitude. From Diageo, I took the culture of acting locally yet thinking globally and from Linklaters I took the inbred notion that a law firm was ultimately a business depending on profits for survival and not an expression of intellect,” he says.

That a law firm is a business is a principle Mr Kuenyehia takes extremely seriously.  And it is something he believes more firms in the country should do. Indeed, it is the one change above all else that he would love to see in the Ghanaian legal system.  The modern law firm, he believes, requires the structural agility and access to investment that any other contemporary operation does.

“I would like the law changed to allow non-lawyers to invest in law firms like has happened in the UK and Australia. The modern law firm is as complex a business as any other and requires just as much investment.  There is no reason why a law firm should not tap into the private or public equity markets for its expansion, for example.”

As corporate culture takes a firmer hold of Ghana, this might not only be necessary, but inevitable. As businesses come to be defined and influenced ever more directly by the legal infrastructure of the country, it is likely that they will rub off each other with the law not only supporting but coming to reflect some of the best practices of its clients.

Global interest in the young oil nation means that will probably come about earlier than many people imagine. Which means that not only law firms but the Ghanaian legal system must itself adjust to enable the greatest gains from these positive developments.

Mr Kuenyehia believes that some institutional progress in this direction is often hampered by the way in which it is administered.

“[The law] is helpful to business in that it provides the framework to encourage private enterprise and encourages foreign participation in most sectors of the Ghanaian economy. The introduction of the commercial courts also made a lot of progress in respect of resolving commercial disputes. I would say however that in my experience there is often a gap between what exists in the law (on paper) and what the relevant civil or public servants administering the law perceive the law to be.”

The nexus between the law and business is one Mr Kuenyehia embodies; a lecturer in Entrepreneurship at the Ghana Institute of Management and Public Administration, he has just published his first book – the 674 page ‘Kuenyehia on Entrepreneurship; a textbook of contemporary Ghanaian entrepreneurship.
.
Research for the book has revealed some new insights on the Ghanaian approach to building businesses to the lecturer.

“I’d say the key hindrances are our educational system and a lack of mentorship. Our educational system is still fundamentally based on what we inherited from our colonial master. It is focused on developing our clerical and literacy skills to make us better employees rather than entrepreneurs.

“In the research that I carried out for the book, I was struck by how difficult it was for budding entrepreneurs to find seasoned entrepreneurs who would mentor them down the entrepreneurial path.

“Elements of our culture also do not encourage entrepreneurship. For example there is a huge fear of failure and a stigma attached to failure. And there is the legendary ‘Phd’ (pull him down) where instead of encouraging people to live their dreams we tend to discourage them. “

“I think the Venture Capital Trust Fund have started a great concept ‘the Angel investor network,’ where they pair entrepreneurs with money with budding entrepreneurs seeking capital and mentorship. The Angel investors provide the capital and mentorship and help nurture the businesses of the less experienced entrepreneurs.  That is one solution but it is pretty limited in reach.
“A network of business incubators throughout the country, to nurture start-up businesses in an enabling environment, with subsidised offices and access to relevant expertise, would be extremely useful to have and should help develop an entrepreneurial culture.”

Finally, Mr Kuenyehia proposes, entrepreneurship can and should be taught in school.

“Although many people argue you cannot teach entrepreneurship, I believe you can. You can inspire students to believe that yes they too can turn their dreams into reality and you can also equip students with a tool kit to go out and do it. At GIMPA, I have been amazed at how students have moved from indifference about entrepreneurship to becoming passionate advocates for entrepreneurship and exploiting the opportunities that they see in their everyday lives.”

Mr Kuenyehia’s own entrepreneurial efforts have been recognised worldwide: the Millennium Excellence Awards conferred on him the 2006 Young Professional of the Year Award; in 2010, the World Economic Forum named him a Young Global Leader and in the same year, he was listed as of one of ‘Africa’s 40 under-40 Achievers by The Network Journal.  More recently, he has been recognized as a New Generation Leader for Africa by the Africa Leadership Network.

The qualities that one imagines merits these honours – hard work, dedication, ability and brilliance – are certainly ones that Ghanaian public service requires and it is gratifying that Mr Kuenyehia is giving it some serious thought. With Oxford & Beaumont now in Accra, London and Aberdeen and set to expand even further in the continent and further afield into Asia and America, the eternal reformer seeks to leave another mark on the tapestry of Ghanaian public service. Though, perhaps, not in the way you imagine.

“I have been thinking very seriously about my lineage and feel a burning desire to contribute through our traditional form of governance. As a child, I fell in love with the small Akwapem village my mother grew up in, when we went to spend time with my grandfather who was the village chief.  Some of my happiest memories of my childhood are of me dancing non-stop at the annual festival. As an adult, I’d like to continue my grandfather’s legacy and contribute to that village, perhaps even by becoming a chief. But I hope to be a very different type of chief. I’d bring a lot of modernity to the stool and the same global mindset that I brought to Oxford & Beaumont.”

And if and when that happens, there can few guesses about what touch King Midas will be bringing.