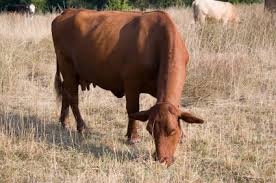 South Africa’s livestock farmers are preparing for more losses after the driest year on record already cut herds and as the hemisphere’s winter nears, fueling food prices that are already climbing at the fastest pace in 18 months.

Scarce grazing and drought-stricken farmers’ inability to buy animal feed may trigger a second livestock selloff during winter after similar conditions caused an oversupply during most of the summer months, Gerhard Schutte, the chief executive officer of South Africa’s Red Meat Producers Organization, said by phone on Monday.

A supply shortage is likely to occur from September and would be exacerbated should good rainfall occur from that period as farmers retain animals to rebuild their herds, Schutte said.

“If the new season is a good rainy season, prices will start going crazy,” Lardus van Zyl, chairman of the meat producers’ body, said by phone. “Not only will the abattoirs be looking for animals, but so will farmers who seek proper breeding stock.”

The warning on meat prices comes as South Africa last year had the least rainfall since records started in 1904.

The drought more than doubled corn prices and drove food inflation to 8.8 percent in February, the highest since August 2014.

Meat-price growth was more subdued at 5.5 percent in the same period due to the selloff in animals.

Under normal conditions, South Africa’s cattle herd is estimated at 13.6 million animals, 7.9 million of which are kept by commercial producers and the rest by subsistence farmers, according to Schutte.

So far, commercial farmers’ stocks have been depleted by an estimated 5 percent due to the drought while subsistence owners have experienced losses of about 10 percent on average, he said.

Rebuilding herds can take three to four years, a process that will weigh on supply to abattoirs, Omri van Zyl, the CEO of farmers’ lobby group AGRI SA, said in an interview at Bloomberg’s offices in Johannesburg.

“We need a subsidy for herd-rebuilding purposes,” Van Zyl said. “The national herd has shrunk. There’s only so much you can do to rebuild it and that’s under normal climatic conditions.”

“To curb food-price inflation, we’re going to have to put the guys in a position where they were last year, before the drought,” Van Zyl said.

“We saw a spike in meat prices in February after the thinning out of the national herd had ended in January and then they corrected back down,” Spies said. “We are still expecting prices to rise again.”