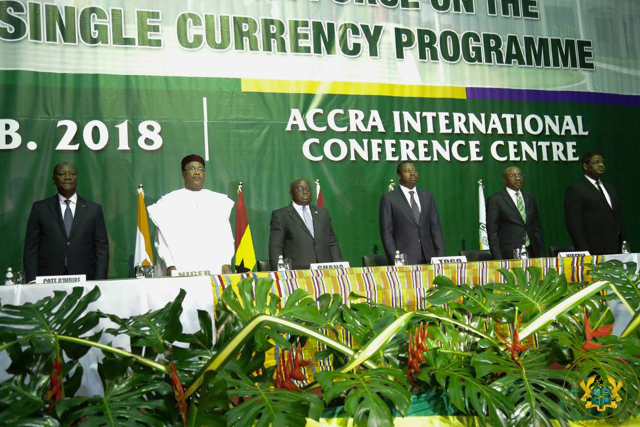 Beginning in January 2020, countries within the West African sub-region will be able to use a single currency called ECO.

The currency was adopted by the Authority of ECOWAS Heads of State and Government on Saturday in Nigeria’s capital Abuja.

The West African leaders endorsed the currency at their 55th Ordinary Session and approved a road map towards the currency’s issuance in January 2020.

There was a roadmap to ensure that all member countries meet three primary criteria for the adoption of the currency.

Countries were expected to also have gross reserves that can finance at least three months of imports.

The other convergence criteria that have been adopted by ECOWAS are public debt or Gross Domestic Product of not more than 70%.

There is also the issue of central banks financing budget deficit not more than 10% of previous year’s tax revenue, and nominal exchange rate variation of plus or minus 10%.

At the end of the Abuja meeting, a communiqué read by Nigeria’s Permanent Secretary, Ministry of Foreign Affairs, Mustapha Suleiman noted that the regional leaders instructed the ECOWAS Commission to work in collaboration with West African Monetary Agency.

The commission is also expected to work with West African Monetary Institute and all central banks to settle on a symbol for the single currency.

The ECOWAS Chairman President Issoufou Mahamadou has said that the revised roadmap does not affect the date for the issuance of the single currency in January 2020.

Speaking about the deadline for adoption Mahamadou said “We have not changed that but we will continue with assessment between now and then.

ECOWAS has a combined population of 385 million and was set up in 1975.

Eight of these countries use one currency called the CFA franc. Those are Benin, Burkina Faso, Guinea-Bissau, Ivory Coast, Mali, Niger, Senegal and Togo.

The current decision to adopt one currency is similar to the move made by the European Union to adopt a single currency called Euro.