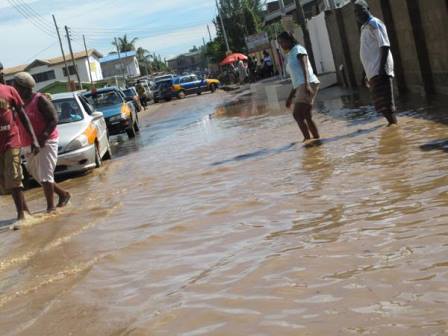 It is estimated that the economy loses over US$100million annually as a result of flooding.

According to Acreaty Ghana Limited, a legal and human resource management firm, the losses are calculated taking into consideration loss of lives, loss of man-hours and damage to property, among others.

“Can you envisage the amount of money people use in repairing their vehicles; the amount of insurance claims insurers pays because people are displaced; the money people spend on hospital bills?” said Elsie Apau Klu, Managing Partner at Acreaty Ghana.

Mrs. Apau Klu spoke in Accra during a thought-leadership series on flood management in Ghana, organised by her outfit and Dredge Masters. The event was on the theme ‘Sustainable dredging as a tool for effective city planning and flood prevention’.

Her comments come on the heels of recent floods across various parts of the country, which claimed lives and property worth several millions.

Just last month, 20 people were reported dead in the Upper East Region from flooding. Several farms, animals and other properties were also reported damaged, according to the National Disaster Management Organisation (NADMO).

In addition to this, seven persons were confirmed dead – including four children in the Ashanti Region in September this year – by NADMO, with property worth millions damaged after a series of heavy downpours.

Meanwhile, this year alone there have been countless incidences of flooding in the Greater Accra Region where the problem is more profound.

“The problem here is that we have not planned our built environment properly; everything comes to halt whenever there is flood and it is not only in Accra that we are experiencing this problem, it is a national issue. So, you can imagine the amount of losses we are making as businesses and an economy at large,” she added.

Mrs. Apau Klu said it is high time serious attention is paid to flooding due to its negative effects on the economy, and revealed that her company will soon commission research to ascertain the amount of work time and how much money is lost by businesses as a result of flooding in the country.

“When you count all these, there is so much money that is lost to flooding. So, the bottom-line is that we are losing as a result of flooding – and we must do something to minimise our losses,” he added

On the way forward, he said there is a need to ensure proper planning with regard to drainage development.

He also advised people not to dispose of waste indiscriminately, as well as not to cement the entire space within houses or properties.

He mentioned that the Ministry of Works and Housing is currently undertaking a project – the Greater Accra Resilient and Integrated Development Project – with support from the World Bank and the Ministry of Sanitation and Water Resources, which he is optimistic will contribute to reducing the problem.

The project aims to improve flood risk management and integrated solid waste management within the Odaw River Basin in the capital city.

It also looks at community upgrading, integration and capacity building.

“When these are all put in place, it is no longer going to be the case that one ministry will develop drains and the one responsible for waste management will not do its job, or the other agencies responsible for removing structures on water ways is not doing its work; everything is going to be integrated,” Ing. Ametefe indicated.

He also said construction of flood retention centres, or dams, is one of the solutions to curb flooding in the country. Flood retention dams work by reducing the flow of water to urban areas.

Areas like the Ghana Atomic Energy Centre near the University of Ghana in Accra, among others, have been earmarked for the construction of such dams.