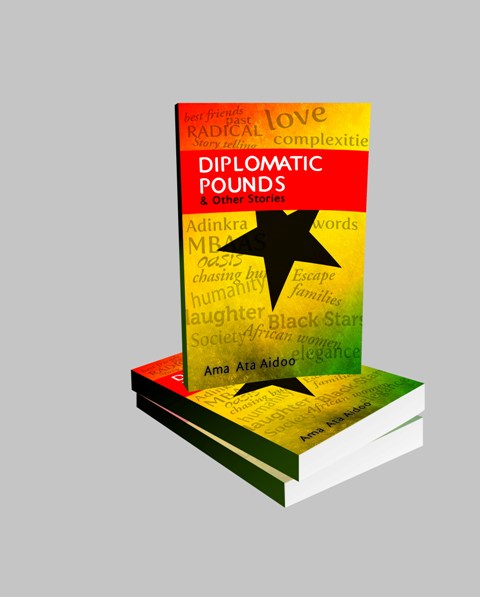 Diplomatic Pounds and Other Stories (Ayebia Clarke 2012; 170) by Ama Ata Aidoo is a collection of twelve beautifully written short stories, which confirm the author’s position as a foremost writer in Africa and beyond. Treating everyday subjects with unique perspectives and a delicate style that she alone possesses, Aidoo opens up old traditions and questions long-held views with a fresh perspective. Whether it is about the story of a woman who leaves the country of her birth swearing never to return or the story of a group of girls trapped in an alien culture where issues of feminine proportions are at variance with what they had grown up with, Aidoo shows that her sense of observation is as sharp as ever and that there is tradition in every situation that could be questioned.

New Lessons, the first story in the collection, provides the platform to subtly question, as in most of the stories, the idea of home and the motive of migration. Most times, people who leave the shores of the continent swear fire and brimstone never to return only to do so in their old age. They castigate their country of birth for its backwardness; lambast its leaders, but stay away from its development. This has become the characteristics of most economic émigrés. On the other hand, these migrants soon realise that in their new countries, long-acquired tastes and behaviours must be shed, if they are to fit in. For instance, women realise that being described as ‘fat with well-rounded buttocks’ is no more a statement of commendation than one that requires attention. Like in Benjamin Kwakye’s The Other Crucifix, where a young academic émigré is forced to separate from his fiancée back home in order to acquire one of the much fancied flat-bottomed girls. These sudden changes cause these émigrés to quickly adopt the required lifestyles capable of ‘making them fit in’, throwing those who are unable to cope into psychosis like some of the girls in Mixed Messages. This psychosis was more pronounced, albeit in a different circumstance, in the life of the protagonist in the title story, Diplomatic Pounds. In this story, a woman becomes psychotic in her later life – acquiring hundreds of bathroom scales – after amassing pounds of weight when she followed her ambassadorial father to parties and other functions.

Though colour is another issue faced by émigrés, Ama Ata Aidoo sees beyond this simplistic view. In her treatment of skin colour, the author explores our affinity to fair skin. In Outfoxed a black woman discriminates amongst her children on the basis of colour and advises her daughter to marry a white man; on the flip side, in Rain, a white man’s family complains of his black girlfriend. Juxtaposing these two stories, Aidoo shows the illogicality of our affinity to what we are not and can never be: that the black person wants (to be) white and a white person wants (to be) himself. Several other peculiar trends in Ghana, that have almost become a culture, were discussed. These include issues such as principles against the norm; lateness, importance and others.

As a gender activist, women’s empowerment – through higher education – is a common theme that runs through this anthology; almost all her protagonists were women. However, Aidoo does not presume that there are no sides to the gender-coin. She examined a situation where girls have the advantage and again subtly poses her questions. The belief that boys are the more ‘cherished’ of the two sexes has biblical antecedents. And even in post-affirmative-action days, it has been the case in several countries and cultures; however, Aidoo provides a different perspective to this long-held tradition with examples from the Akan matrilineal system in the stories Did You Ever and Funny-Less. In this inheritance system, girls are much more cherished than boys.

Regardless of these, it would be wrong to describe Diplomatic Pounds and Other Stories as an agenda-driven anthology, for Aidoo tells her stories using everyday occurrences as her motif and if the motif has such biases, discrepancies, divisions, then it is not the writer who is to blame. Besides, she does not set out to push an agenda but to tell a story, one that is about everyday people. These stories have a very authentic Ghanaian feel to them and this authenticity has nothing to do with the setting, for they cannot be grouped under the hut-and-thatch or calabash stories that have come to define ‘The African Story’. This authenticity is the result of a voice honed over time through deliberate and precise choice of words, the transliteration of phrases and the unabashed used of idiosyncratic Ghanaian phrases, proverbs (or improverbs – improvised proverbs) and dialogue. For example Feely-Feely, the title of one of the stories is Ghanaian-ish.  It is to the benefit of Ghana’s writers that Aidoo has entrenched this style of writing, just as the Nigerians have done, paving the way to other writers not to necessarily ape the English and English-translated authors we have come to admire but to know that language is dynamic and could be adopted and appropriated. In brief, Aidoo’s stories – including Diplomatic Pounds and Other Stories – are relatable.