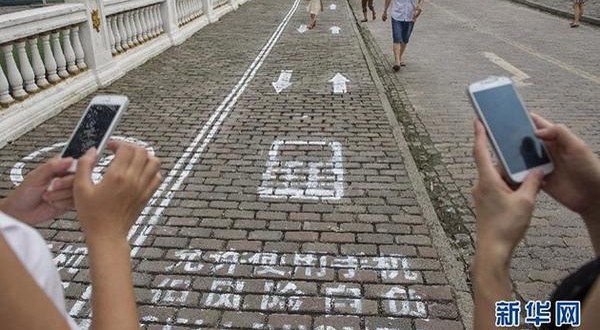 In a country with a population as large as China’s (over 1.3 billion), unique solutions are sometimes needed for pedestrian management.

With the practice of texting while walking becoming increasingly common, the city of Chongqing recently came up with an idea that may seem ridiculous at first, but could catch on: separate cell phone lanes for pedestrians.

The 100-foot stretch of sidewalk is emblazoned with large signage, in Chinese and English, warning pedestrians to walk in the proper lane.

“Cell phones, walk in this lane at your own risk,” says one, right next to the other lane, which reads, “no cell phones.”

In addition to the painted warnings on the street itself, the city has also posted large signs in the area that read, “First mobile phone sidewalks in China,” with a diagram illustrating how to use the street. According to a report in the Telegraph, local officials created the lane to remind pedestrians that “it is best not to play with your phone while walking.”

If you’re looking at the images of the street and thinking, “this is ridiculous, people should just be more mindful of their surroundings,” you’re probably right.

However, in recent years, as smartphones have continued to gain in popularity, no amount of pleading from fellow pedestrians has managed to stop the zombie hordes of texters walking the city streets with their heads buried in their phones, forcing others to dodge out of the way.

A couple of years ago, the city of Philadelphia rolled out an April Fool’s prank that included an “E-Lane” similar to the one in China, for texting pedestrians.

But as texting while walking becomes the norm, fewer people are laughing as the accidents pile up.