China continued its grind to more moderate growth in the third quarter as investment slowed, providing little upside for a global economy flirting with its first recession since 2009.

Gross domestic product rose 6% in the July-September period from a year ago, the slowest pace since the early 1990s and weaker than the consensus forecast of 6.1%. On the upside, factory output improved and retail sales held up, but slowing investment growth remained a concern.

Policy makers appear to be allowing the world’s second-largest economy to drift lower as they seek to clean up the financial system and curb excessive credit growth while they fight a confidence-sapping trade war with U.S. President Donald Trump. With a drop off in exports to the U.S. expected to continue as long as tariffs remain, the economy is likely to keep struggling as falling factory prices hit company profits and rising consumer inflation hits spending power. 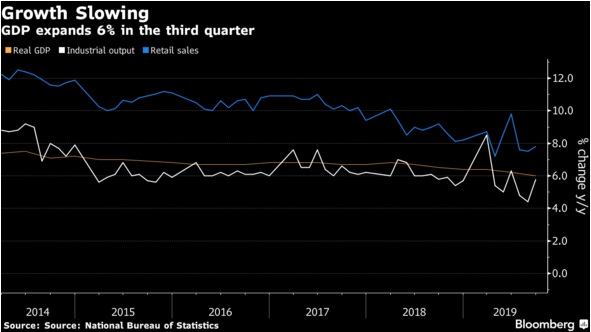 Even with the slowdown, year-to-date growth of 6.2% suggests the government can hit its target of an expansion of 6% to 6.5% for 2019. Until now, officials have focused on limited, targeted measures such as reserve-ratio cuts and credit support, wary of expanding the nation’s already heavy debt load. A meeting of the Communist Party’s top leadership due in the coming days may present an opportunity to review stimulus settings.

“China’s economy is grappling with both external and internal headwinds,” said Frederic Neumann, co-head of Asian economics research at HSBC Holdings Plc in Hong Kong. “Exports started to contract of late amid wobbly global demand and rising tariffs in the U.S. Despite some stabilization in retail sales and industrial production in September, overall demand continues to soften, reflecting still relatively tight credit conditions.”

Stocks pared earlier gains after the data, with the Hang Seng slipping 0.5% and the Shanghai Composite falling 1.3%. The offshore yuan was weaker at 7.0850 per dollar at 2:43 p.m. in Hong Kong.

Further Details from the Report:

China Can’t Shop Its Way Out of This Slowdown: Daniel Moss

Nominal growth, which is un-adjusted for inflation, slowed to 7.6% from a year earlier, according to Bloomberg calculations. That’s the slowest since the third quarter of 2016.

The nominal growth rate “tends to capture the cycles in the economy better,” according to a research note from Trivium China. It also gives a better idea of whether growth is fast enough to repay the nation’s growing debt, as lending is denominated in nominal values and isn’t adjusted for inflation.

The slowing nominal rate indicates that the deflator, a reading of inflation across the economy, dipped to 1.6%.

As China slows, it is buying less from the rest of the world, pushing its trade surplus higher and dragging on global economic growth. That’s having a knock-on effect on trade partners, from developed economies like Germany to commodity suppliers.

Global policy makers including People’s Bank of China Governor Yi Gang are meeting in Washington this week for the International Monetary Fund’s annual meetings. The IMF set the tone for the gathering, making its fifth-straight cut to its forecast for 2019 global growth, which is on pace for the slowest expansion in a decade. 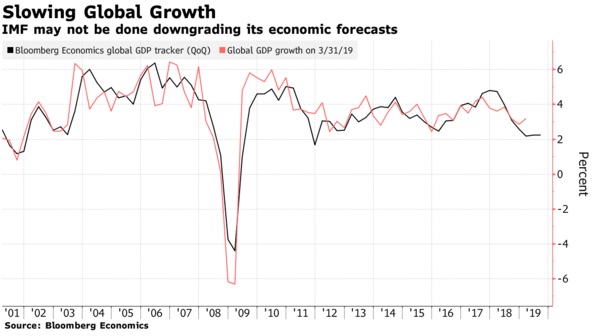 he long-term slowdown underlines the challenge for companies doing business in China now, where high sales growth had once been a given.

French distiller Pernod Ricard SA said growth in China slowed to 6% in the latest three months, less than one-quarter of the year-earlier rate. Nestle SA said sales in the country were flat for the first nine months, while Unilever said business there “slowed a little” in the latest period.

“China’s 3Q GDP growth, while avoiding falling below 6% for now, was in line with our view that the consensus forecast appeared optimistic. September industrial production growth was unexpectedly strong, but a further deceleration in investment growth underscores the challenges of using infrastructure spending to support growth.”

Investors are looking for further confirmation of a detente between the U.S. and China on trade, as signs emerge that an agreement struck between negotiators in Washington this month and due to be signed by President Xi Jinping and Trump in November isn’t water-tight.

China’s Ministry of Commerce Thursday signaled that Beijing is still pushing for the removal of all tariffs imposed by the U.S. since the trade war began — a concession that’s not currently on the table.

“The economy would almost surely slow further with the current policy stance,” said Larry Hu, head of China economics at Macquarie Securities Ltd. in Hong Kong. “Due to the lack of demand now, the government has to create more demand by itself through infrastructure spending. Even a trade deal is not an substitute for an escalation of stimulus.”