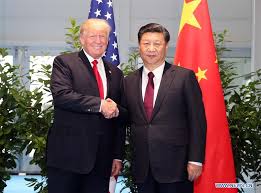 China wants further talks as soon as the end of October to hammer out the details of the “phase
one” trade deal touted by Donald Trump before Xi Jinping agrees to sign it, according to people familiar with the
matter.

Beijing may send a delegation led by Vice Premier Liu He, China’s top negotiator, to finalize a written deal that
could be signed by the presidents at the Asia-Pacific Economic Cooperation summit next month in Chile, one of
the people said.

Another person said China wants Trump to also scrap a planned tariff hike in December in
addition to the hike scheduled for this week, something the administration hasn’t yet endorsed. The people asked
not to be named discussing the private negotiations.

The details of the verbal agreement reached in Washington last week between the two nations remain unclear.
While Trump hailed an increase in agricultural purchases as “the greatest and biggest deal ever made for our Great
Patriot Farmers in the history of our Country,” China’s state-run media only said the two sides “agreed to make
joint efforts toward eventually reaching an agreement.”

China’s Ministry of Commerce did not immediately respond to a request for comment on further talks. Geng
Shuang, a foreign ministry spokesman, reiterated on Monday that both sides had made progress and said he
hoped “the U.S. will work with China and meet each other halfway.”

Investors have struggled to determine whether the U.S. and China reached a breakthrough in an 18-month trade
war, with global stocks mixed on Monday. Worse-than-expected September trade figures in China underscored
the growing pressure on both Trump and Xi to reach a deal to avert a wider slowdown in the global economy.

China has become increasingly wary of any statements from Trump. Trust between the two sides suffered a big
blow in May 2018, when Trump put a stop to a deal for China to buy more energy and agricultural goods to
narrow the trade deficit.

The U.S. president further sowed distrust in August when he claimed that Chinese officials
had called and requested to restart trade talks.

For Xi, it’s seen as politically unfeasible to accept a final deal that doesn’t remove the punitive tariffs altogether.
Nationalists in the Communist Party have pressured him to avoid signing an “unequal treaty” reminiscent of those
China signed with colonial powers.

“The U.S. must concede on its December tariff threat if they want sign a deal during APEC summit, otherwise it
would be a humiliating treaty for China,” said Huo Jianguo, a former Chinese commerce ministry official who is
now vice chairman of the China Society For World Trade Organization Studies. “The U.S. has definitely shown
some good gestures but we shouldn’t exclude the possibility of another flip-flop.”