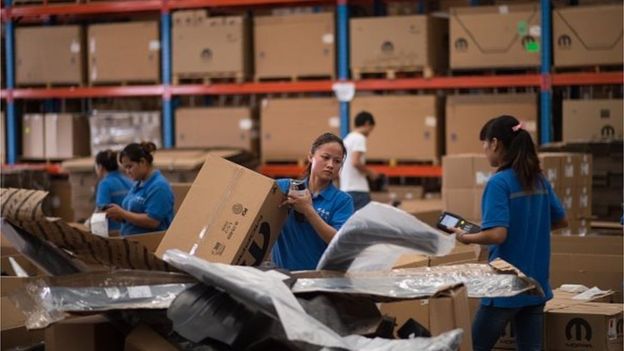 China’s economy grew at an annual rate of 6.7% in the first quarter of the year, says the government.

It is the slowest quarterly growth in the Chinese economy in seven years, but in line with expectations and China’s own growth targets.

In the final quarter of last year, the economy expanded by 6.8%.

But there are pockets of growth. Investment in industrial assets and infrastructure registered a surprise jump by 10.7% in the three months to March, when compared to the same period last year.

Consumers also appear to be spending, with retail sales showing a robust 10.5% jump for March.

That fits Beijing’s attempts in recent years to transform China from an export-led economy to a consumer-led one.

To tell the truth China correspondents struggle with this country’s economic statistics because we don’t know how accurate they are and GDP figures are no exception.

Some provinces and companies are said to exaggerate their production figures to push themselves to the top of the pile but there are also those who are thought to under-estimate their performance so they can attract greater central government support.

For this reason there are economists who measure this country’s financial health using electricity consumption figures instead.

By this measure the world’s second largest economy would still be growing but perhaps at not at such a rapid clip.

Asia’s economic giant is attempting to make up for a loss in traditional production and exports by shifting to a model much more dominated by services and domestic consumption.

It is in the process of sacking millions of workers and looking for somewhere else to place them.

This might be the correct thing to do in the long run – the government would argue that it is working to eventually deliver more sustainable growth – but, in the short term, what it means is more pain to come.

China earned the label of being “the factory of the world” from decades of manufacturing activity, the main driver of its rapid economic growth.

Premier Li Keqiang told the annual meeting of parliament last month that China “will face more and tougher problems and challenges in its development this year, so we must be fully prepared to fight a difficult battle”.

Tony Nash, chief economist at consultancy Complete Intelligence, based in Singapore, said the NPC had “conveyed a sense of real progress that Chinese leadership understood much of the problems and was working toward necessary state sector reforms”.

Mr Nash said analysts “see a more stable environment starting in the middle of the third quarter as some of the reforms announced at the NPC start to take hold”.

Craig James, chief economist at Commsec in Sydney, Australia said there was “a collective sigh of relieve, not just here in Australia but around the world. All the results are above market expectations, it shows the rebalancing of the economy is proceeding to plan”.

“If anything, the figures are surprisingly high, so one wonders about the sustainability of the growth rate for future months. Hopefully we’ll see other economies around the world focus on lifting their own growth rates,” he said.