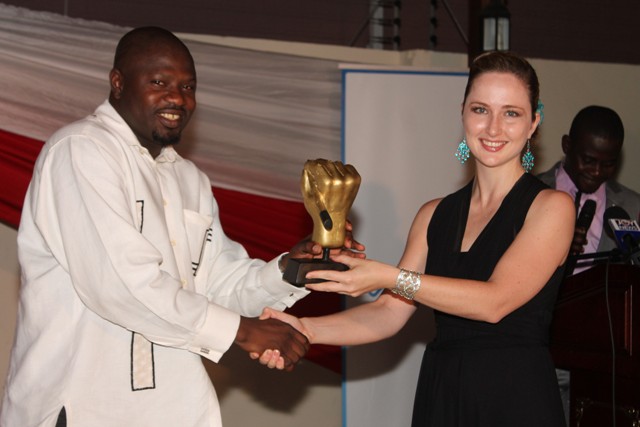 Business World CEO, Kofi Mangesi receiving the award on behalf of the team

Ghana’s leading business magazine Business World has been adjudged the best business magazine in Ghana at the Gold Awards for Business Journalism organised by the Institute of Financial and Economic journalists (IFEJ) and MASOE productions.

The awards ceremony which was chaired by Prince Kofi Amoabeng, CEO of UT Bank also saw several dignitaries from the private sector in attendance. The Awards ceremony which is the first of its kind in the country is aimed at rewarding journalists who have excelled in areas of economic and financial reporting as well as improve the quality of economic and business reportage in the country.

It was a night of splendor and fun as business journalists from several media houses competed for various awards in several categories.

Business World also won the Economic reporter of the year award for its article: “Economic Expectations of the Year (2011)”.

The editor of Graphic Business Lloyd Evans received the Life Time Award, whilst Samuel Doe Ablordeppey of the Daily Graphic was adjudged the overall Best Business Journalist of the Year.