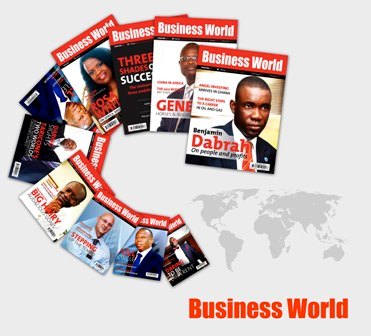 Ghana’s leading business magazine, Business World, has registered a strong showing in the nominations for the 2013 edition of the Gold Awards for Business Journalism.
Business World, which emerged winner in the Business Magazine of the Year Award category, in the maiden edition last year, has received a total of seven nominations in six categories to emerge as the media house with the most number of nominations and in the highest number of categories.

The Gold Awards Secretariat, in a press statement, noted that this year recorded an increase of over 52% with entries totaling 71 for print, TV, radio and online media. And as expected, this year’s entries were an improvement over the previous edition both in quality and diversity of entries, as well as in the variation of media organisations.

“We appreciate that the award has been accepted by business journalists as we collectively work together to raise the standards of business reportage in Ghana and the rest of Africa,” the statement said.

Winners of this year’s Gold Awards for Business Journalism in 18 categories will be announced at the award ceremony on December 14, at the Airport West Hotel in Accra.