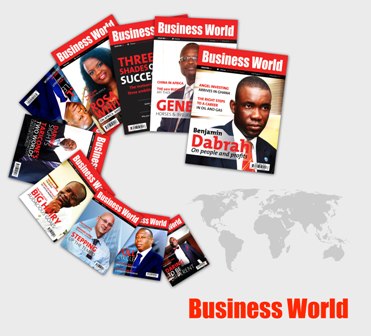 Business World, Ghana’s leading quality publication on business news, trends, issues and personalities has been nominated for several awards in the maiden edition of the Gold Business Journalism Awards to be held in Accra on October 13th.

In a statement released on October 3rd in Accra, Masoe Productions West Africa and the Institute of  Financial and Economic Journalists names the magazine as nominees for the Print Media of the Year (Magazine) as well as for Economic Reporter of the Year for its piece on “Economic Expectations of the Year (2011)”.

Kwame Ofori Appiah, Associate Editor, was also nominated for Reporter of the Year and Feature Writer of the Year. The entries were “The New Wave of Reverse Migration to Ghana” and “Of Opportunities and Challenges: Housing Delivery in Ghana”.

The statement said  the nominees were arrived at after careful scrutiny of some 34 entries. Three entries were chosen for each category and a winner will be announced at the event, which is expected to be attended by business leaders and representatives from Ministries, Departments and Agencies of Government.

The Gold Business Awards for Business Journalism is sponsored by the World Bank, State Housing Corporation and Stanbic Bank and will be hosted by Airport West Hotel.