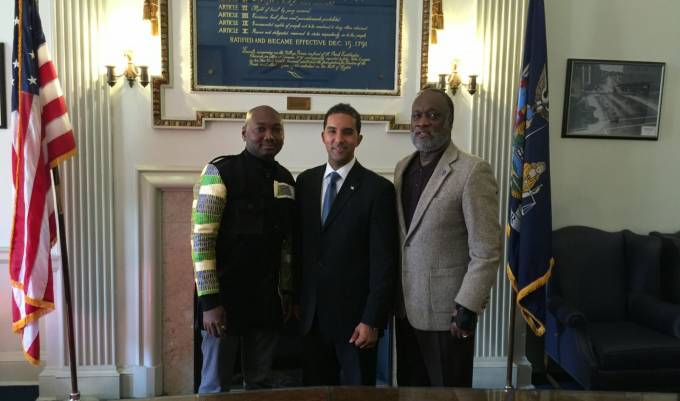 Homepage » Economic » Bridge to africa economic summit comes off may 21

High-profile experts and business leaders from Africa and US will converge at this year’s ‘Bridge to Africa Economic Summit’ in New York in the United States of America to explore investment avenues in both continents.

The two-day summit is expected to bring participants up to speed with the latest trends in various industries and markets.

To ensure the event’s success, Mr. Kojo Ampah Sahara — CEO of ADEPA Africa Investments, has held discussions with major players in the United States. He described them as very useful.

During his meeting with Mr. Frank Garcia, Chairman, National Hispanic Chamber of Commerce, who traced the history of Hispanic/Latino people to Africa and expressed his joy for the opportunity presented him and his organisation to work on bridging the gap between Africa and the Hispanic community.

He invited Adepa Investments Ltd. and the AGI to the upcoming event in April at Columbia, and pledged his total support in the partnership arrangement to ensure a successful summit in May.

He also visited Mayor Richard Thomas of the City of Mount Vernon, New York, who thanked Ghana for once again choosing his city as a conduit to further enhance  Ghana-USA cooperation in general.

He promised to engage Westchester county and also the New York State Chamber of Commerce to bring them on board the project.

The event will bring together under one roof investors, trade experts, entrepreneurs, manufacturers, industrialists of all shades (Small and Medium Scale) to network, market their businesses and brainstorm on the way forward.

The mission is billed as an annual programme that brings investors and business communities from Africa and the United States together to explore avenues of investments in both continents and craft new plans in the areas of finance, marketing, partnerships, job-creation, poverty alleviation, networking, exchange of ideas among others.

This will equip companies of participants to be more competitive and better-informed of the markets they can expand to.

With effective promotion of the forum, famous businesses are expected to be in attendance to promote their goods and services.

Participants will also visit various business associations and there will also be a dinner dance ‘Networking Day’, and women networks with over 100 businesses.

Integrated with the major activities will be networking platforms that enable participants to share experiences, identify new partners and build powerful business relationships.

These presentations will cover critical sectors such as finance and investment, agri-business, oil and gas, construction, real-estate, manufacturing, mining and tourism/ fashion.

The target groups for the summit include business executives, politicians, mayors and government officials, as well as industrialists and Entrepreneurs.

The goal of the event is to persuade investors in the United States to make deliberate and conscious efforts to invest in Africa’s economy.

Those in attendance will be African business executives, trade officials and mayors, meeting with United States counterparts to brainstorm and share ideas on moving Africa’s private sector forward.

The Summit will provide direct access and engagement between opportunities available in Africa for investments/contracts with tailor-made would-be investors/contractors in USA.

This landmark mission aims to develop a strong partnership between African business executives and those of the United States by harnessing their capacity to boost economic growth, which is the African Union’s vision for attaining middle-income status by 2020.

Bridge to Africa 360 Degrees, Inc. is dedicated to creating a partnership between Africa and the Diaspora, educating and empowering them to build healthy and dynamic communities.

The vision is to have communities in Africa and the Diaspora function in the areas of health, education, social and economic development so as to make them self-sustaining entities

Bridge to Africa 360 Degrees, Inc. was established for the purpose of providing financial, moral, educational and expert consultative support to a group of organisations whose focus is to improve the economic, educational, cultural and health issues facing the Least Developed Countries (LDCs) on the continent of Africa; and also communities of the African Diaspora in the Least-developed and Developing countries around the world.

To achieve this goal, Bridge To Africa Inc. has created partnerships with coalition members.

Bridge To Africa 360 Degrees, Inc. will develop educational models aimed at informing the youth especially across all cultures between Africa and the Diaspora.

It is anticipated that young people will begin communicating through Skype, emailing, texting and telephoning.

The aim is to break down cultural barriers and gain ideas from each other to enhance understanding of global citizenship and our obligations and responsibilities to each other as members of One Humanity.

Bridge To Africa 360 Degrees, Inc. carries out its mission by providing workshops, seminars, and cultural events such as food-tasting events. Councilman Yuhanna Edwards, Chairman of Bridge To Africa Incorporated, urged all pan-African organisations in the USA to join forces with his coalition to help bring economic emancipation to Africa and the African Diaspora.