Homepage » Finance » BoG turns to Yuan to save troubled cedi 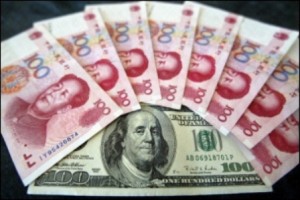 The Bank of Ghana (BoG) is pushing for the use of the Chinese Yuan as the alternative foreign trading currency to the United States dollar.

It has consequently made the Yuan available to commercial banks as the alternative settlement currency to businesses who want to trade in the Chinese currency.

The Head of Financial Stability at the Bank of Ghana, Dr Benjamin Amoah, told the Graphic Business on the sidelines of a news conference in Accra that, “we want to encourage the use of currencies of Ghana’s major trading partners such as the Chinese Yuan, which is already available, instead of the US dollar as the sole settlement currency”.

The central bank has since last year been circulating the Yuan as one of the key strategies to shore up the value of the cedi which has been depreciating fast against the US dollar.

“Work is far advanced in getting the Yuan into the system because we have seen that it is needed – and demand always creates supply, so we have made it available into the system, go to your banker and you’ll have the Yuan,” Dr Amoah said.

This will mean, businesses and traders dealing in the Sino region will not need to convert to any major currency before transacting business.

The Yuan is now valued at about 39 pesewas to a cedi on the interbank market.

Analysts have hailed it as a move that will help ease demand for the US dollar in the country’s forex market.

Already, some commercial banks in the country have established relationships with Chinese banks in order to facilitate trade finance for their clients. Ecobank, for instance, has created a special Chinese desk in some of its branches. Zenith Bank has also established a representative office in China while Societe Generale is also developing relationships with big Chinese companies.

In 2012, China-Ghana trade volume rocketed to US$5.4 billion while available data for the first nine months of 2013, show that trade between the two countries reached US$3.8billion.

The value of the cedi, which has plummeted in recent times as a result of the pressure put on traders’ demand for the dollar, will see some recovery when the Yuan comes in.

Reports say trade between the United States Department and Ghana which has been on the ascendency over the past decade, dropped for the first time from a little over $1.6 billion in 2012 to about $1.4 billion at the end of last year.

On the global market, the yuan overtook the euro to become the second most-used currency in global trade finance after the dollar last year, according to the Society for Worldwide Interbank Financial Telecommunication (SWIFT).

The Bank of Ghana had said in January this year that it expected the Ghana Cedi to rebound as soon as the local banks start trading in the Chinese currency.

This, according to the Governor, Dr Henry Wampah is possible because it anticipates more businesses in the country to trade with the Asian nation.

Currently, traders in Ghana heading to China need to take dollars with them that would later be converted to yuan, according to Dr Wampah.

“Many more people are travelling to China to do business and we think we should make life a bit easier for them,” he said.

“It will also ease pressure on the Cedi, as well as decrease the demand for dollars,” he added.

The local currency has depreciated by more than 23 per cent against the dollar since the start of 2013 as companies demand the US currency to pay for imports into Ghana.

The central bank introduced new currency-trading regulations for banks to improve liquidity and boost transparency a fortnight ago.

It now believes that trading in the Yuan will help strengthen the Cedi.