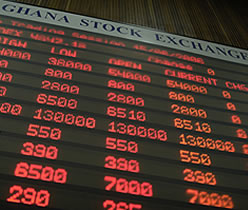 Ghana stocks reached their lowest price levels in 21 months as investors sold shares to free up cash as they contend with the fallout from banking reforms executed over the past two years.

The Ghana Stock Exchange Composite Index retreated 1.5 percent by mid last week bringing about the lowest close since October 2017 which itself followed the first two of nine commercial bank liquidations, forced by the Bank of Ghana from August 2017.

Ghana’s banking industry regulator completed a clean-up and recapitalization exercise in December that closed nine banks and led to several mergers, cutting the number of lenders to 24 from 34. An impending merger will further reduce the number to 23 shortly, although five banks are yet to complete their recapitalization to the new minimum of GHc400 million.

Eight months after the BoG claimed completion of its banking sector recapitalization and clean up, some investors still complain that their funds aren’t available because some lenders have been recapitalized through bonds and have low cash levels, impeding clients’ access to savings.

The stock market weakness is caused by the “after effects of the banking crisis,” Eli Keledorme, a stocks analyst at SAS Finance Group, has said. “A lot of investors have funds locked up in some of these institutions and some investors had to sell because of the need for funds.”

Actually though it is only some non bank financial intermediaries that still have problems meeting obligations to depositors – all the banks still licensed are solvent enough to meet withdrawal requests. However solvency problems in non bank deposit takers has been widespread persuading the BoG to forcibly liquidated hundreds of them over the past few months and the refund of customers deposits by government which has agreed to underwrite them is proving to be a long, and drawn out process.

The stocks benchmark composite index has dropped 8.5 percent this year. And dealing has dwindled, with GHc88.8 million (US$16.6 million) in stocks traded in the first half, down from GHc456.3 million a year earlier, according to Central Securities Depository Ghana Ltd.