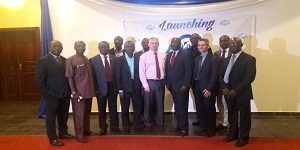 An association to manage one of Accra’s finest Grade ‘A’ commercial addresses has been launched. It has been christened the ‘Airport City Association’ (ACA). Among it’s job is to manage the Airport City common service areas. It will help to maintain a high security protocol and market Airport City. The association would also provide a network for building owners and tenants.

Director of ACA, Mr Salah K. Kalmoni, said the idea to set up ACA has been on the drawing table for about six years.

“The main reason why ACA was created was to ensure transparency and representation. GACL found resistance in collecting the property rate. Introducing ACA made it easier; instead of coming from the top, it is now coming from within,” he said.

Mr Kalmoni said ACA is legally registered. They are located on the eighth floor of the Silver Star Tower at Airport City.

“We [ACA] are currently working on our bylaws,” he added.

He explained that the association will focus on security within the Airport City vicinity. They will collaborate with National Security and the Ghana Police to keep the area well secured.

Mr Kalmoni added that ACA will enforce a ‘no-street-parking’ law. They’ll also help free the area of beggars and hawkers.

Managing Director (MD) of GACL, Mr Charles Asare expressed his pleasure at the formation of the Airport City Association.

“My joy stems from the fact that when I took over as the MD of GACL, the operational relationship between the airport and the property owners of the Airport City had not been properly structured or established,” he noted.

“This initiative is part of programmes the GACL and stakeholders will embark on to further develop this enclave to what we have envisioned it to be.” Added Mr. Asare.

The GACL is a member of the association because it invested in its (ACA) establishment.

The MD urged the association to work together to address the challenges confronting the Airport City.

“The GACL will continue to pursue the vision of transforming the Airport City into a metropolis. We see a metropolis that will provide a one-stop shop for travelers and the general public,” Mr Asare assured.

The Airport City, Accra is a 43-acre modern urban development concept. It expands the commercial component of the Kotoka International Airport’s business portfolio.

The idea was conceived about two decades ago as part of the Accra Re-development Project. At that time, the whole area was a bushy terrain occupied by squatters.