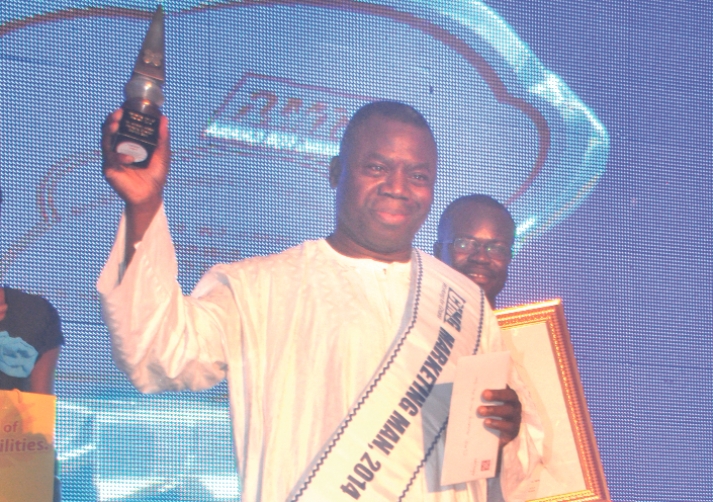 The Managing Director of Stanbic Bank Ghana, Mr Alhassan Andani, has been named the Marketing Man of the Year 2014 by the Chartered Institute of Ghana (CIMG) at the weekend.

Mr Andani, an astute and smart banker, has led a team of motivated staff and management to transform the Stanbic Bank from a third quartile bank into a first quartile bank which has become a household name in the country.

A citation accompanying his award said the Marketing Man of the Year had promoted the wellbeing of staff and management of the bank.

Since taking up the position, he has helped establish several branches and internet banking solutions for the Ghanaian market, and has grown the size of the bank’s balance sheet to undertake big-ticket transactions.

A much-sought-after international public speaker, financial expert, motivator, and authority on leadership, Mr Andani has led the transformation of Stanbic Bank from being one of the minor players in the financial services industry to a tier-one bank.

PwC asserts in their most recent bank industry survey that: “In the last three years, Stanbic consistently gained market share amidst the risk relating to the unfavourable macroeconomic environment.’’

Explaining further, the report stressed that Stanbic grew by 48 per cent between the end of 2012 and end of 2013, moving ahead of GCB Bank and Standard Chartered Bank to hold 7.4 per cent of the industry average.”

A graphic business Banking Survey earlier in the year, Stanbic Bank emerged among the top tier banks with appreciable assets and deposits.

Born on November 24, 1960, Mr Andani had a Bachelor of Science Degree at the University of Ghana, Legon in 1984 and obtained a Master’s Degree in Banking and Finance from FINAFRICA, Milan, Italy in 1992.

In 1999, he obtained an International Management Certificate at INSEAD, Fontainbleau, France.

He cut his banking career as a Project Officer at SSB Bank Limited in 1984 and rose through the ranks to become the Regional Project Manager, Upper Regions in 1987.

He joined Standard Chartered Bank in 1993 as an Account Relations Manager, a position he occupied until December 1995, when he was made Regional Manager, Domestic Corporate.

Mr Andani joined Barclays Bank Ghana as Executive Director, Corporate Banking, in April 2000. In 2004, he was made the Deputy Managing Director of the bank.

He was sent to Johannesburg, South Africa, as Director, Non Presence Countries at Barclays Africa between July 2005 and March 2006, when he was head-hunted to lead Stanbic Bank Ghana as the Managing Director, a position he has occupied till date.

Under his leadership, the bank grew from a two-branch operation into a full-fledged tier-one bank with offerings covering the full stretch of banking services and products, a performance which has been recognised both locally and internationally.

Stanbic was named the Best Investment Bank for the year 2013 by the renowned EMEA finance magazine.

The bank’s growth during the last decade has been largely attributable to its deep understanding of the key issues, trends and challenges facing companies doing business in Ghana. Therefore, with Mr Andani at the helm, the bank has significantly improved its service delivery system, increased its footprint to 31 branches, 72 automated teller machines (ATMs) and five Cash Service Points across the country.

It has also upgraded its systems to a world-class banking platform, enabling Stanbic to better understand clients’ needs and structure personalised solutions for them.

The channels’ outfit has also been enhanced further catapulting the bank from traditional branch banking to electronic transactions and cards. MoneyWallet, a multi-currency card that allows customers to upload four different currencies on one wallet for use in different localities, was introduced onto the market in 2014.

In recent times, Stanbic Bank Ghana has financed big ticket projects such as the Stanbic Heights, One Airport Square, Aviance, and West Hills Mall and participated in the annual COCOBOD loan syndication.

Mr Andani is a member of the Board of Directors of Stanbic Bank Ghana Ltd, Ghana Home Loans Company Ltd, and the Board Chairman of Savanna Agricultural Research Institute (SARI).