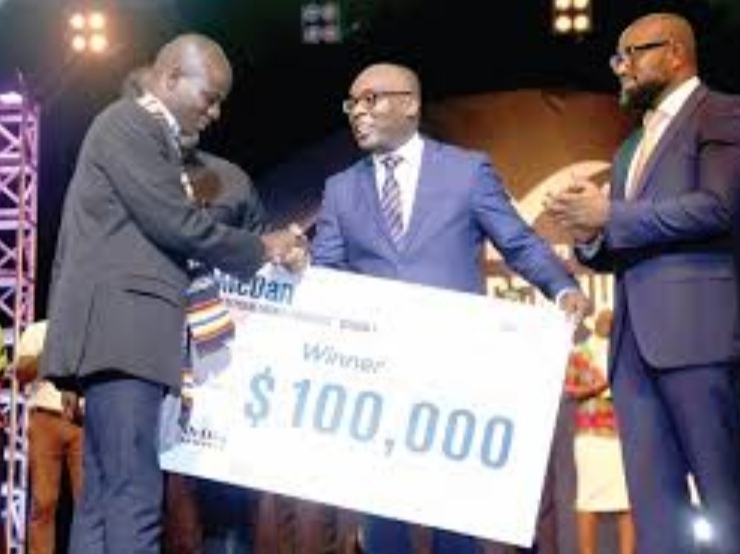 Alhassan Hamza Akoligo, a young entrepreneur operating Alkoh Shea Butter at Gambaga in the Northern Region, has emerged the winner of the McDan Entrepreneurship Challenge season one, taking home a cash prize of ‎US$100,000.

The 37-year old entrepreneur, who is into agro-processing was adjudged the winner due to the critical role his business has played in production and sale of shea butter in Gambaga and its neighbouring towns in the northern region.

Speaking on his business and the cash prize, Mr. Akoligo expressed his profound gratitude to the McDan Foundation indicating that little did he know that a business he inherited from his mum after searching for job for years on completion of the university would be this viable to receive such recognition.

“When I applied to be part of the McDan Entrepreneurship Challenge, I didn’t have the confidence and any business plan, but I was able to gather the courage after Chairman McKorley told me that it is not about the business but about me. He told me he will transform me from liability to an asset which he has done indeed,” he said.

The McDan Entrepreneurship Challenge, a business modelling and mentorship reality programme organised by the McDan Foundation, is aimed at supporting the next generation of Ghanaian entrepreneurs to grow their business into becoming multi-million-dollar enterprise.

The nine other pitched businesses that made it to the final of the competition, were given GH¢25,000 each to invest in their business to be able to sustain and expand the business.

The Founder and Executive Chairman, McDan Group of Companies, Daniel McKorley, noted that Akoligo was selected winner of the season one of the competition due to the straight forward nature of his business. “It is a business that can fly faster and within a year or two, turn into a million-dollar business that will impact society.

McDan speaks to the heart of entrepreneurs. It is not about the money (US$100,000) but looking at the person behind the business and their desire to make a difference and we are investing in them. There is one goal of this project; to create a continues legacy of building sustainable businesses through empowerment and entrepreneurship,” he said.

Speaking on behalf of the Minter for Business Development, Alhaji Hafiz Adam’s, Chief Director of the ministry, stated that government is committed to training 15,000 entrepreneurs this year out of which a selected 5,000 will receive funding from government to scale up.

He also expressed the ministry’s satisfaction with the tremendous opportunity McDan is offering start-ups to grow and indicate that the ministry will support the other nine finalists with GH¢300,000 to aid in developing their action plans into reality after the competition.

The challenge which started in April 2019, with an initial 7,000 entries, went through series of processing to shortlist ten businesses for the finals out of the 60 semi-finalists. The 10 finalist were: Better PM enterprise; Seepig Farm; Greenfuel Innovate Africa; Permor Tea; Myda Foods; Agrifund Enterprise; Kente Master; TigerHouse; Agrizone and Alkoh Shea Company

Alhassan Hamza Koligu, is a 37-year old young entrepreneur operating Alkoh Shea Butter at Gambaga in the Northern Region. The firm adopts modern tools and technology to produce quality shea butter in a hygienic environment to meet international standards. It also supplies shea kernel and other products such as shea butter cosmetic and natural products.