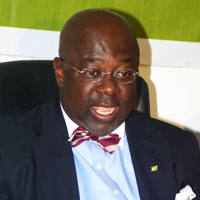 Daniel Duku, a former Chief Executive Officer (CEO) of the Venture Capital Trust Fund (VCTF) who is standing trial with five others for allegedly causing financial loss of Gh¢42.8 million to the state has decided to refund Gh¢15 million as restitution to the state.

Two other accused persons- Irene Anti-Mensah, who was an Executive Assistant to Mr Duku and Frank Aboagye Mensah, the husband of Anti-Mensah, have entered into an agreement with the Attorney -General (A-G) to pay restitution to the state.

Per their actions, the three accused persons have essentially pleaded guilty to the charges leveled against them but want to make amends by refunding the money in line with Section 35 of the Courts Act, 1993 (Act 459).

Agreement
The Director of Public Prosecutions, Mrs Yvonne Atakora Obuobisa, Friday, June 5, 2020 informed the Accra High Court that the three accused persons have reached an agreement with the A-G, and therefore the state would like the court to accept the agreement and convict the accused persons as guilty.

He, therefore, directed the two sides to fully execute the agreement and file it at the court for the court to determine it per Section 35 of Act 459.

Act 459
Under Section 35 (1) of Act 459, a person accused of an offence which had caused “economic loss, harm or damage to the state or state agency may inform the prosecutor whether the accused admits and is willing to offer compensation or make restitution and reparation for the loss, harm or damage caused.

Section 35 (2) of Act 459 states that when an accused makes an offer of restitution, the prosecutor shall consider whether the offer is acceptable or not and inform the court.

In the event the offer is not acceptable to the prosecution, the trial shall continue, but if the offer is acceptable, the accused person will plead guilty and the court will convict him on his own plea.