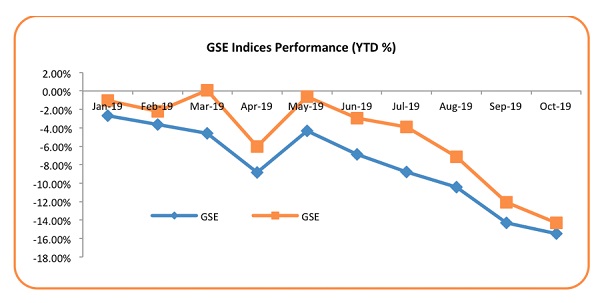 The ill-sentiments arising from the banking sector clean-up and investors anxiousness ahead of the release of the third quarter financials of listed companies are some contributory factors responsible for the slide on the Bourse.

At the end of the week’s trading activities, the GSE-Composite Index dipped by 125 basis points to settle at 2,173.98 points, representing a year-to-date loss of 15.48 per cent.

The GSE-Financial Stocks Index also posted a week-on-week decline of 1.80 per cent as it settled at 1,845.69 points, corresponding to a year-to-date loss of 14.30 per cent.

Market activities also slowed down in the week under review

A total of 0.33 million shares valued at GH₵0.30 million exchanged hands as compared to the 16.37 million valued at GH₵12.11 million recorded in the previous trading week.

Ecobank Transnational Incorporated Ltd was the most actively traded stock as it accounted for 40.24 per cent of the overall traded volume.

Market capitalisation dropped further by 0.81 per cent to settle at GH₵55,760.26 million.

A total of eight equities altered their week’s opening prices.

Fan Milk Ltd was the lone advancer recorded on the Bourse, as it recovered three pesewas of its recent losses to trade at GH₵4.53 per share.

Standard Chartered Bank Ltd was the worst performing stock on the bourse, losing 51 pesewas to trade at GH₵16.00 per share.

The Government of Ghana treasury securities recorded rate moderation in the week under review.

Interest rates on the Government of Ghana treasury notes and bonds also remained unchanged as they were not scheduled for the week’s auction.

An amount of GH₵600.76 million was raised by the government after accepting all bids tendered.

This fell below the week’s target of GH₵678.00 million but exceeded the GH₵404.11 million raised in the previous week’s trading.

The 91-Day T-Bill was the most purchased bid, constituting 93.84 per cent of the total bids accepted by the government.

An amount of GH₵632.00 million is expected to be raised by the government in the upcoming auction from the sale of the 91-Day, 182-Day and 364-Day T-Bills.