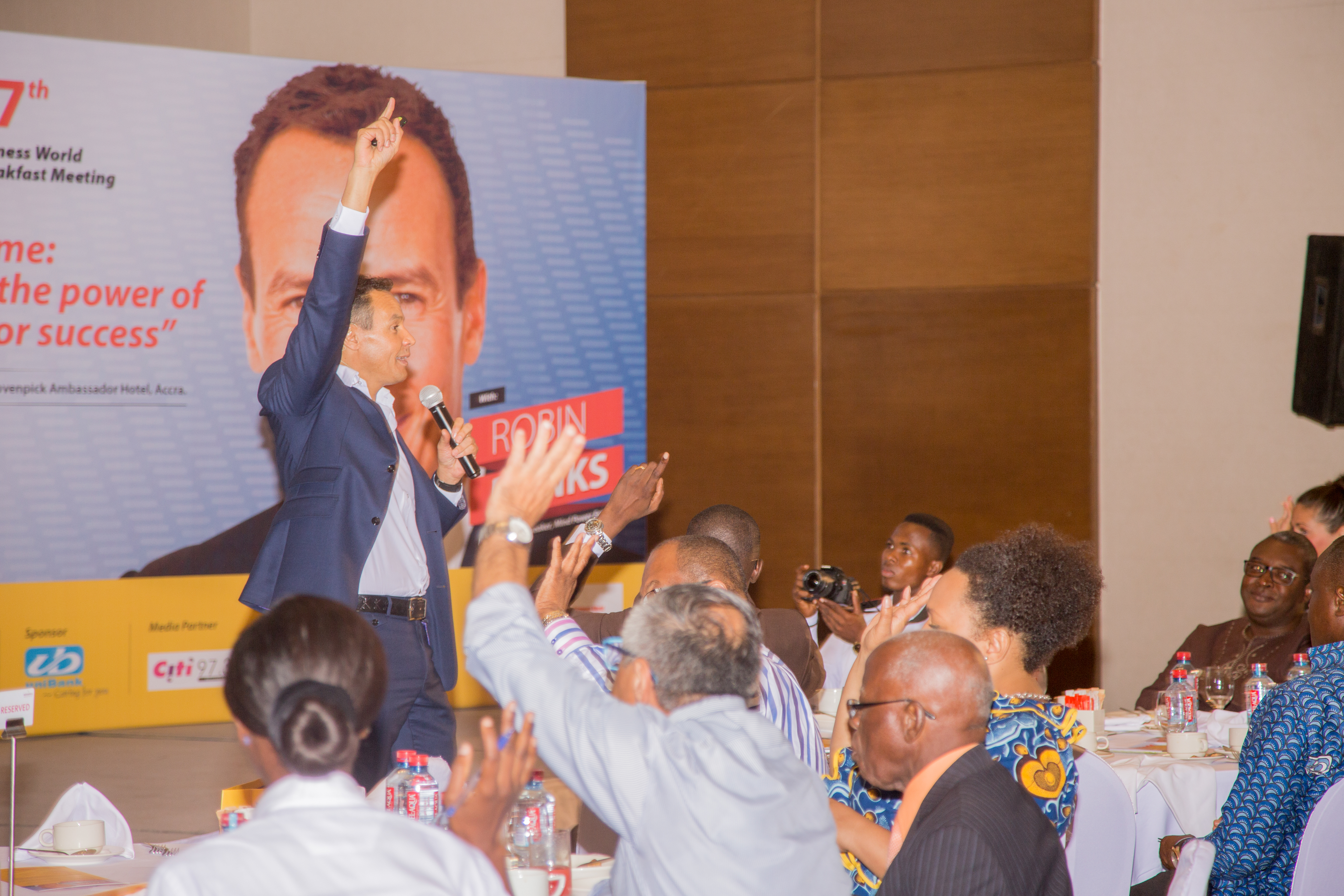 Fun is not the word most people would use to describe anything involving business executives. But fun is exactly what the 17th MTN Business World Executive Breakfast Meeting turned out to be.

The Executive Breakfast Series was started by Business World to help provide Ghanaian business executives with an avenue for meeting successful business men and women from around the globe and also pick up tips and tricks to stimulate further success in business.

On Friday, 6th May 2016, Banquet room 2 at the Movenpick Grand Ambassador Hotel was charged with laughter, energy and positive thoughts and it was all thanks to Robin Banks. 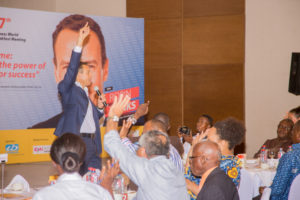 Robin Banks is an international speaker from South Africa whose message is simple; harnessing the mind’s power to achieve greatness, hence the theme of this year’s maiden breakfast meeting; Unleashing the Power of the Mind for Success.

Robin Bank’s style of speaking can be described as engaging, humorous and sprinkled generously with nuggets of wisdom throughout. Nuggets like, “you will never change your reality until you change what creates your reality.” and “we need successful individuals to have a successful nation.”

Executives from MTN, UniBank, Coral Paints, Kimo Home and others were coaxed to their feet soon after helping themselves to the delectable breakfast spread when Robin Banks asked them to call out their inner child and open themselves up to a few self-knowledge exercises.

His vivid, real life illustrations to explain his points were involving and easy to relate to. For instance, the story of his mind convincing him that his girlfriend was cheating when in fact she was doing nothing of the sort. This was to explain how one’s mind can mislead one.

“Don’t believe everything your mind tells you, sometimes your mind makes up things,” he asserts.

Robin Banks grew up in South Africa and said, as a youngster, he was always getting into trouble in school. He was talkative and very social but an average student. Even though he wasn’t keen on schoolwork and his mother was worried about his future, he recalls his aunt saying to him once that his out-going personality will take him places. And it turns out that it has.

As a teenager he moved to the United States to California where he says he lived in a surprisingly spiritual community.

It is in this haven that he came into himself and realised that we are spiritual beings having a human journey and not the other way round.

It was then that he decided that he was not destined to be an actor as he initially wanted to be but a teacher and he wanted to teach the world that everything we all need to be successful is within us.

He started with youth leadership which led to talks and soon days-long workshops. Robin believes that opportunities are all around us and it is up to us to recognise and use them. He officially started his career by doing workshops until someone suggested he summarise his message into an hour long talk for some employees.

His first of such talks was titled “From Victim to Victor” and it was to 30 people. These days, Mr Banks says that he’s spoken to over a thousand people per session.

His why – to help people reach the pinnacles of their prowess; his how – by positive affirmations on a daily basis. Robin believes that while we use our conscious mind daily, it is our subconscious mind that does all the work.

And by getting to our subconscious we can effectively change the way we think because our thoughts affect our lives.

So Robin’s recipe for success: plenty of hard work, a dollop of self-esteem and a daily dose of mental affirmations; for indeed, if you don’t believe in yourself, who else will?

He encouraged delegates to consciously decide what we think on a daily basis and make sure those thoughts are positive because it’s not what happens to us that makes the difference but how we react to it.

To end it all, in what we will now refer to as true Robin Banks style, he had the room up on its feet again; this time, to dance to an upbeat song.

Suffice it to say that all the delegates who walked out of banquet hall 2 on 6th May 2016 left with a renewed sense of purpose, lifted spirits and a positive attitude.