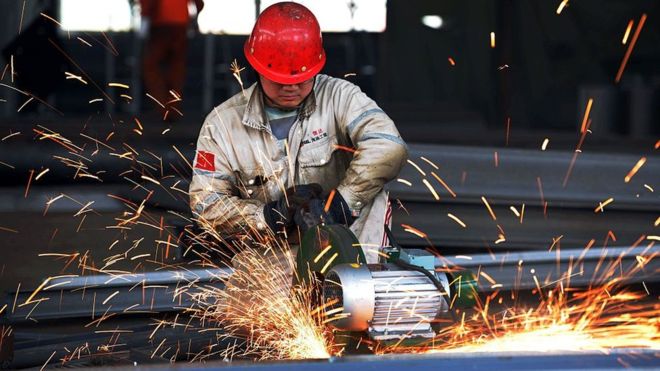 New fears about the health of China’s economy have been sparked by figures showing that both exports and imports fell more than expected last month.

Exports fell 1.8% compared with April last year, according to official figures, reversing a recovery in March.

That marked the 18th consecutive monthly decline, suggesting that domestic demand remains weak despite a rise in infrastructure spending.

Economists had expected exports in April to fall by just 0.1%, after a surprise 11.5% rise in March.

They had also expected a smaller slide in imports, 5%, after a 7.6% decline in March.

Zhou Hao, of Commerzbank in Singapore, said: “Both exports and imports came in weaker than expected, in line with the soft trade performance across Asia, pointing to another challenging year for emerging markets … some sort of market correction might be inevitable.”

China’s exports to the United States – the country’s top trade partner – slid by 9.3% in April, but those to the European Union increased by 3.2%.

Economic growth in the world’s second-largest economy slowed to 6.7% in the first three months of this year.

That was the weakest figure since the financial crisis, but activity picked up in March as government measures to kickstart growth, including six interest rate cuts since late 2014, seemed to help.

However, the April figures suggest that the rebound may not be sustained.

Both official figures and a private-sector survey for April revealed a mixed picture for China’s manufacturing sector.

Beijing has said it will take steps to boost exports, including encouraging banks to increase lending and raise tax rebates for some companies.

China increased its share of world exports from 12.3% to 13.8% last year, meaning that its export sector remained competitive despite higher costs.