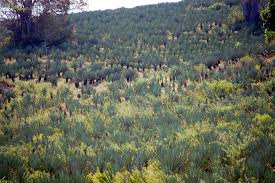 Tanzania is increasing sisal cultivation with the aim of producing as much as 100,000 metric tons a year by 2021 and eventually surpassing Brazil, the world’s largest grower of the crop, the head of the industry regulator said.

The East African country, which is the second-biggest producer of the fiber used in textiles and dartboards, has been implementing a 10-year production plan since 2012, Yunus Mssika, the director of the Tanzania Sisal Board, said Tuesday in a phone interview from the coastal town of Tanga.

“Our aim is to overtake Brazil because in the past Tanzania used to be the leading sisal producer,” he said.

“Right now the demand for fiber is so huge and what we produce is essentially a small portion of the demand. We cannot match the demand.”

Output could increase to 43,000 tons this year from 40,000 tons in 2015 as farmers start to harvest a new crop planted three years ago, Mssika said.

In 2013, Brazil produced 150,584 tons of the crop that’s also used to make rope and twine, statistics by the Food and Agriculture Organization of the United Nations show.

Kenya, in third place, exported 21,464 tons of the fiber in 2015, according to its Agriculture, Fisheries and Food Authority.

Prices have stabilized since 2010, giving Tanzanian farmers confidence to invest in the crop, Mssika said. A ton of sisal fiber fetches between $1,900 and $2,200. Tanzania’s government, with a $48 billion economy, is trying to diversify its agriculture exports earned $35.5 million from sisal last year, he said.

The nation also exports tobacco, cashews, coffee and cotton. It last ranked as the world’s biggest sisal grower in 1964, when it produced 230,000 tons, before the use of synthetic fibers curbed demand, according to Mssika.

China has overtaken the U.K. as the biggest buyer of fiber from Tanzania, which also sells to Saudi Arabia, Spain, Japan and Morocco and is now targeting markets in Israel, the Philippines and Pakistan.

Most of the production in neighboring Kenya is on large holdings by growers such as REA Vipingo Plantations Ltd., while the nation is also encouraging farmers with limited land in a bid to meet demand for the fiber from construction industries in Nigeria and Saudi Arabia.

Tanzanian sisal covers about 60,000 hectares, mostly on estates, and authorities are now recruiting subsistence farmers to accelerate expansion, which it believes will catapult it the top position. Brazil relies chiefly on small-scale growers.

“The advantage we have as a country is that the players we have in our industry are large-scale producers of sisal while Brazil is predominantly small scale,” Mssika said.