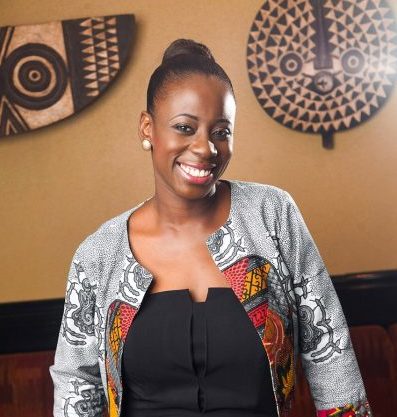 Sitting along a quiet, clean and paved stretch leading to Labone, an affluent surburb of Accra is Ghana’s top wine café, Sai Wine and Champagne Cafe.

It’s some minutes after 11 am on a Thursday morning and two cleaners are busily dusting off, mopping just in time for prospective customers who would visit for lunch as I stepped in for my scheduled interview with its Founder, Nadia Takyiwaa-Mensah.

Sai Wine and Champagne Café is a quaint cosy wine and champagne café located in Labone, tucked into a courtyard, Accra’s hidden gem and with over 100 varieties of wine and champagne, paired cheeses and meat, says a description on its website.

The café serve wines, whiskeys, spirits, salads and tapes alongside continental cuisines such as beef fillets, pasta with shrimps and tomato sauce to put in brief.

Sai Wine was opened in 2014, a time where most Ghanaians often relied on fast-food joints or restaurants for anything food and relaxation.

So it came as no surprise that the concept of Sai was met with slight hostility at its nascent stage and although the idea behind it was, “by Ghanaians, for Ghanaians” the café was always filled with non-Ghanaians.

“For the first 9 months of operation, we were not getting Ghanaians coming in and when we did some research, we found out that people are intimidated; they often thought it was an expensive place for expats and people in the diaspora,” says Takyiwaa- Mensah, owner of Sai Wine.

“So we had to open ourselves a little bit to invite people in, hold wine tasting events and changed our language in communication because it sounded more premium than intended,” she added.

The idea was conceived when she went on holidays in New York in 2014.

“The interesting thing is when God gave me this idea, He told me a lot of things before we started. He told me about how the business is going to go, what to expect, what not to expect and it’s just been a journey since then.”

Four years on and Sai has become a place where people have come to appreciate the serenity, mood and environment.

“It’s taking sometime for people to get the concept but now they really are catching on and I couldn’t be happier to be honest with you,” she says with a bliss of satisfaction.

This isn’t the only business she’s running.

The mother of a nine-year-old doubles as the Chief Executive Officer (CEO), of Sixth Sense Manifesto, her first dive into entrepreneurship in Ghana.

The company blew up and experienced successful growth after they received a contract from Vodafone, with companies such as the defunct UT bank plus other high valued clients following suit.

She attributes the steady growth of her business to God, referrals and an amazing on line profile.

Today, Sixth Sense Manifesto has escalated to working with a lot of international brands entering the market and existing companies.

Within a year and half after it was set up in Ghana (2012), it established presence in Nigeria.

The company according to its founder is now a Pan-African agency with a strong presence in 8 African countries and a staff of 7.

“One thing is that we are not trying to be an agency that’s got like 20 or 30 members of staff meddling around. We want to make sure that we have attention to detail so everything from the cleaner, driver, and account manager to digital marketing team, we make sure we work together.”

“The highest capacity (of workers) we have had at any given time is 18 and that was because we had a lot going on but generally we try to stay as a boutique agency,” she averred.

If there’s anything that Takyiwaa- Mensah has learnt throughout her entrepreneurial journey, it will be to be susceptible to growth, open to learning, not compromising on excellence desired to be achieved.

Growing up in the UK

“Growing up in the UK was interesting because when you are born and raised in a country, you don’t know you are different from others in the environment that you are in but there’s always that struggling between what you were taught at home in terms of culture and respect, how you should behave versus what my environment was dictating to me and what the English culture deemed acceptable about things,” she recounted.

Although she had an interesting life being black and growing up in the UK, she doesn’t deny the subtle racial nuances.

“During the time I was growing up, I’ll say being black was still a taboo so to speak. We had a few black celebrities in the media but it wasn’t cool to be a black person left alone of an African descent so I was blessed because I was popular, athletic, smart, funny, gone to school with the people for a very long time so throughout my school years I actually didn’t really have any problems”

“…But you can always tell that there was the underlying racist connotation that was there. Whether it’s in the media or your friends every now and then.”

Fears as an entrepreneur

“God had prepared me prior to my move to Ghana in terms of my career choice, the space I was operating in and when that happened I wanted to be obedient and such I did….I came to Ghana with faith.”

Although she harboured no fears moving to establish business in a country she’s never lived in, her parents had doubts with her move especially against the backdrop of navigating the Ghanaian system and understanding the cultural nuances that existed.

Today her parents are proud of her move and are inspired that she moved successfully.

The latest MasterCard Index of Women’s Entrepreneurship (MIWE), revealed that Ghana has the highest number of female entrepreneurs in the world (46.4 per cent of businesses in the country owned by women).  However, this laurel is not without defect as most women entrepreneurs in Ghana are faced with incessant constraints like finance, regulatory and technical barriers. The report raised some questions as to whether support is readily available for women entrepreneurs to either start or expand their business.

“I don’t think it’s a gender issue, I know male entrepreneurs who are amazing but don’t get the support they need. I think it’s fundamentally an infrastructure, financing or environmental issues; I think it cuts across board and not gender specific.”

For someone who calls herself a kingdom entrepreneur, she believes that if it’s your calling to become an entrepreneur, God will give you the blue print that you need to be one.

She advised young business owners to adopt sound finance management practices as a lot of creative entrepreneurs fail to understand the operation of a business.

She had a message for Ghanaians in the diaspora with plans of coming home to establish businesses.

“You need to be Gh-a-n-a-i-a-n and not someone from “Abrokyire” (Abroad) coming to do business in Ghana.  Manage your expectations, be patient, let Ghana break you down and build you back again.”