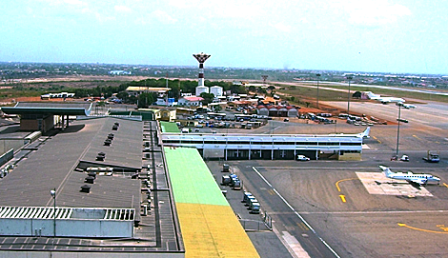 Transport Minister, Dzifa Ativor, has said government is moving urgently to kick-start the development of a second international airport to sustain the recent boom in the country’s aviation industry. “There’s a buildup of pressure on the Kotoka International Airport and airlines jostling for space at KIA keep asking what we’re doing about the challenge. “Government is serious about developing the new airport to help promote the country’s quest to be the aviation hub in West Africa,” Dzifa Ativor said when she led a powerful industry delegation to Ningo-Prampram district to inspect land earmarked for the project. Ativor said the inspection marks the commencement of the process that will lead to feasibility study on the land to be followed by inviting investors to participate in the designing and construction of the airport and other facilities on the 16acre land. The country’s only international airport has in recent years come under tremendous pressure following high annual industry growth rates averaging 10%. The number of carriers has currently more than doubled to 33 frown from 15 in 2000. Passenger air traffic is projected to hit six million by 2015, representing an increase of over 200 percent from a total of 1.8 million in 2011. A recent Airbus’ Global Market Forecast 2011-2030 predicts Accra and Lagos will be aviation “mega-cities” in the West African sub-region by 2030 — with the two destinations handling more than 10,000 long-haul passengers daily. Dzifa Ativor pleaded with the chiefs, who are the custodians of the land, to ensure that the project when started would not be plagued by incessant land litigations which is rampant in the country in recent times. “We desperately need this project to create job opportunities for our youth who have been migrating to other parts of the country because of the absence of opportunity here” Nene KanorAttiapah, Acting Paramount Chief of the Ningo traditional area said, adding that the traditional authority was unanimous in its decision to back the project and therefore would not countenance any litigation. The project site, about 15 minutes’ drive off the Accra-Sogakope road and about an hour’s drive from Accra would be linked up to the city by a four-lane dual carriage way. The upgrading of the Tema Motorway end of the road, from its current two lanes into four lanes, is expected to commence next year, with an interchange at the Tema end, incorporated into the design to ease vehicular traffic. This was disclosed by the Deputy Chief Executive of the Ghana Highways Authority, KassimNuhu, who cautioned against the siting of structures, both by the utilities service providers and for residential purposes, since that will create an added cost to road construction linking the airport to Accra, A third international airport for the country is being planned for the city of Tamale, touted as the fastest growing city in West Africa, primarily to service the northern sector of the country and to link it with the neighbouring Sahelian countries .