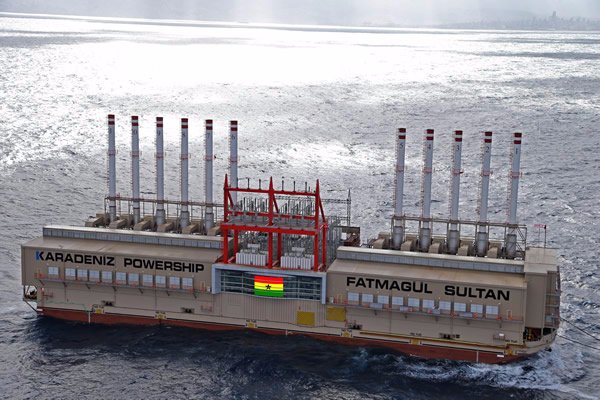 President Nana Addo Dankwa Akufo-Addo has stated that the Government was committed to providing cheap and sustainable power to Ghanaians.

He said the requisite energy partners have been brought on board to provide the energy needs of the country.

President Akufo-Addo said this when he formally turned on the valve for the first flow of indigenous gas from the Takoradi Regulatory Metering Station to the Karpowership at the Sekondi Naval Base.

The Karpowership was relocated from Tema to the Sekondi Naval Base to ensure it received natural gas from the Atuabo Gas Processing Plant to help produce 470 megawatts of electricity.

It was dependent on heavy oil to operate but with the conversation to gas, it would save the country about one billion dollars as the cost of production.

The President said since Ghana now produced its own gas to power the Karpowership, it would result in the establishment of more factories and industries, which would help Ghana become an industrial economy.

He said the production of the 470 megawatts of electricity would also go a long way to help bring down the cost of electricity as well as ensure stable and sustainable power supply.

President Akufo-Addo urged Ghanaians to endeavour to save energy by using energy-efficient bulbs, of which the Government had procured 12 million for distribution nationwide.

If properly utilised, the bulbs would save about 120 megawatts of electricity, he said and urged the public to patronise them.

He commends the Turkish Embassy for the cordial relations, which had resulted in the provision of the Karpowership to address the electricity needs of Ghana.

The President commended the Management of the Naval Base for the feat and urged the chiefs and people of Sekondi-Takoradi to adopt the project as their own.

Mr John Peter Amewu, the Minister of Energy, said the commissioning was the President’s dream fulfilled and commended all the stakeholders for making it possible.

He said that would ensure sustainable power supply and bring outages to the barest minimum as high energy management systems had been put in place to manage all challenges.

The Chief Executive Officer of Karpowership, Mr Volkan Buyukbicer, expressed gratitude to the Naval Base for hosting the ship and cooperating with the team.

He said with the production of the 470 megawatts of electricity, Ghana would now be in a better position to export electricity to neighbouring countries.