Homepage » Business Leaders » PEOPLE AND PROFITS: HOW BENJAMIN DABRAH USED ONE TO ACHIEVE THE OTHER 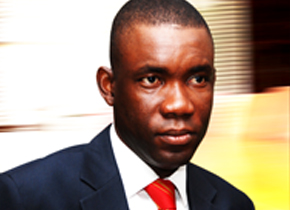 So what are your first thoughts when you are made Managing Director of Barclays Bank Ghana, the largest foreign bank in the country with an operation that has lasted nearly a century and a brand that is widely recognized as a major player in the international financial system? And you are only 36?
“Excitement”, the man himself admits. ‘I was excited and also a little bit apprehensive because the size of the challenge then dawned on me”.

Indeed, many would have felt the same way.

When Ben Dabrah took over at Barclays Bank Ghana in 2008, the bank was going through some difficult times. The financial behemoth had just declared a loss for the first time in its history in Ghana.  It would record a similarly somber result at year end 2009. This, Mr. Dabrah says, was partly due to the rapid expansion the bank had embarked on in the previous two years as well as what he describes as “some control issues” they had at the time.

Not one to shy away from a challenge, Mr. Dabrah quickly took on the challenges he identified. “We have done some restructuring, scaled back a bit but that has not been our only strategy. If you look at impairment, it’s not only the size of the bank that determines your impairment, but the quality of the controls around your lending processes and the quality of the people you lend money to all contribute to it.”

Again, under Mr. Dabrah, the bank has sought to be more efficient, re-engineering its processes and procedures to ensure that its investments pay off and costs are brought down.
To assess the impact of these reforms, one need not look far. In 2010, the bank turned around the losses of the preceding years and made a significant profit. In 2011, they are set to do even better.
While these measures are important, the Managing Director credits the success to something that you get the sense means a lot more to him: the people. “Businesses are made and broken by the quality of the people you have and how willing they are to contribute. One of the things we’ve done is engage more with our people to make sure that we get their hearts and minds in the right place.”
And it is that, which he calls his greatest achievement at the bank.
“I am extremely proud when I look at the people who work in Barclays today. I get the sense that people are more passionate about their work; that they are prouder to work here. We want to make this place the greatest place to work and I get the sense that we are on our way to doing that. The numbers are just an output, a manifestation of what we have been trying to do.”
How does he manage this?
“I am very hands on and the people who work with me will agree. I like to participate while at the same time empowering the people who work with me. It’s a blend of letting people get on with it while giving enough direction to ensure the best results.”
Over the two and a half years he has been boss, his greatest achievement has also been his greatest challenge. Above all, he says, his challenge was to guide the staff of this great bank through that difficult period, getting them to be proud and passionate about working at the bank and making both staff and customers alike believe that the glory days could be recaptured. And they have.
Barclays is not just any bank, after all. Mr Dabrah speaks proudly of the 300 year heritage of the bank, its reach, its position as a global financial services powerhouse with as much expertise and experience in retail banking as in more complex operations, the geographical reach of the bank (every continent), its solid brand presence and its status as one of the few banks that survived the global financial crunch scarcely bruised.
When you run such a bank, you worry less about being flavor of the month; you concentrate more on substance, sustainability and stability. This is why Mr. Dabrah is not too worried about the challenge of the new banks that have arrived following liberalization of the financial services.
While recognizing the excitement that some of the banks have brought, he reels off the statistics that show that Barclays can and is handling the challenge:  “Barclays has the largest network of ATMs in the country; we are the only ones who offer free ATM services to our customers – no one has followed us yet; we have the lowest base rate on the market, etc.”
He disagrees then, that anyone else but Barclays is leading the cause of innovation and change in the market.
The market itself, with twenty-seven banks, may just be too crowded. However, Mr Dabrah is not on the side of those who think that there should be a mandatory cap on the number of the banks in the country. He favours an organic process where mergers, acquisitions and non-legislative ways are used to build bigger, better and stronger banks.
So how can the industry do more for the economy?
Running a bank as big and as powerful as Barclays Bank, Mr. Dabrah holds views on the financial services industry that are telling. While happy with the general regulatory direction, he insists that a good residential address system, a credible personal identification system, a credit referencing system and an efficient legal system of enforcement would be a boon to both lenders and borrowers.
Happily, “there is some positive movement in those directions.”
For the man himself, what movement? Where does one go after leading the second biggest bank out of loss into profit before you are 40?
“I am not sure that this is the last time that there will be an organization with the scope to do more. To that extent, there will still be a chance for me to make a difference. It won’t be about the size of the organization or the title. I am sure that when this job is done, there will be other businesses or undertakings that require new ideas and energy.”
Still, the challenge must persist. An avid golfer, Mr. Debrah’s  views about the game reveals something about his philosophy. Apart from being a good form of exercise, golf is appealing to Mr. Debrah because “you compete against yourself. Unlike, say, tennis where how you play is determined by how fast your opponent hits the ball, you hit your own ball and control almost all the variables so all you are doing is improving what you did the previous day. This is a bit like life. I see myself as always looking for an opportunity to improve on what I did the day before.”
Such a view can lead one to crave fulfillment when others would be seeking the rocking chair. “At 38, if I were fulfilled, I would be very worried. And in the sunset of my life, I want to look back and see that in every situation I found myself in, I gave the best I possibly could; that I was true to myself and everybody I came into contact with during my journey. It’s not about the outcome but the effort. If I feel that I put in my best I would feel fulfilled.”
An appropriate philosophy for a man who confesses to feeling “very emotional about Arsenal.”