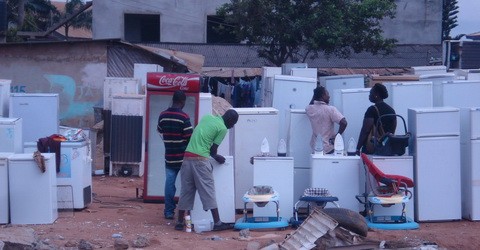 Government, in ongoing efforts to make Ghana the energy hub in West Africa, launched an ambitious nationwide programme, May 15, to remove energy inefficient and environmentally dangerous refrigerators from homes, replacing them with efficient, environmentally friendly ones.
“If we are able to meet our target of exchanging 50,000 units of refrigerators, over the next three years, this number alone can save the country an estimated 35 million units of electricity,” said Dr. Ofosu Ahenkorah, the Executive Secretary of the Energy Commission (EC).
The Energy Commission, government’s implementing agency of the scheme, piloted the Refrigerator Rebate and Exchange Scheme in Accra and its environs,from September 2012 to April 2013, under which 2,100 refrigerators were exchanged.
“This means we removed the same number of inefficient fridges from households and replaced them with highly efficient ones and in effect cut electricity consumption of fridges in these households,” said Dr. Ahenkorah.
Refrigerating appliances consume an average of 1,200kWh per year in Ghana, or approximately three times more energy than the maximum allowed in countries with robust standards and labelling programmes.
Such inefficient appliances result in US$50 to US$100 per year of potentially unnecessary electricity expenses for a typical owner.
The wasteful consumption of electricity results in more than 0.7 tons per year of CO2 emissions per appliance, and the uncontrolled release ofozone depletion substances(ODS) from used appliances is estimated to result in the equivalent of another two tons of CO2 every time an inefficient, used appliance is improperly disposed or replaced.
With about 2 million inefficient refrigeration appliances in use throughout Ghana, the economic cost of such inefficiency is many hundreds of millions of dollars to the national economy, while the avoidable greenhouse gas emissions is many millions of tons of CO2 over the long term.
The EC estimates that a typical Ghanaian household consumes 3,000 kilowatt hours (kWh) of electricity a year and thus spends close to GHC540 annually on electricity bills.
An inefficient refrigerator is estimated to contribute about 40% of total household energy, costing GHC216, while the new refrigerators that are being promoted consume less than 500kWh per year and thus reduce its contribution to household energy to 16%, cutting the electricity bill down to GHC90.
“We expect this scheme tofollow the success story of the energy efficient light bulbs, the CFLs,” he said, referring to a similar initiative in 2007 that saw the swapping of six million units of CFLs for incandescent bulbs in households for lighting, which resulted in electricity demand savings of over 124MW and energy cost savings of over US$33 million per annum.
Under the Refrigerator Rebate and Exchange Scheme, fridge owners could choose refrigerating appliances with Ghana Standards Authority energy efficiency star-rated labels on them.
Customers can only select any of appliances rated from two to five stars. One-star rated appliances are not part of the scheme.
The higher the number of stars on the label, the more energy efficient the appliance.
A two-Star fridge attracts a discount coupon of GHC150 while a three- to five-Star fridge attracts GHC200.
The discounted value on the new refrigerating appliance adds onto the significant savings on electricity bills to the consumer and is meant to encourage low income earners to participate in the scheme, who otherwise would have been excluded because they find the prices of new refrigerators prohibitive.
Dr. Ahenkorah said the rebate is an opportunity for customers to get the best deal on new fridges on the Ghanaian market since prices have been drastically reduced for a period under which government is providing funds to make the acquisition of fridges affordable.
“New refrigerating appliances under the scheme could now be purchased from as low as GHC180 to GHC800 after the discount is applied,” he disclosed.
ECOBANK Ghana is a major banking partner in the scheme, offering flexible and attractive consumer loans, to customers who may need it, to cover payment of the top-up after the discount is applied on fridges and freezers.
Participating electric appliance distributors in the scheme include Somovision and Appliance Masters, who participated in the pilot, and new entrants to the scheme Melcom, a major general household appliance distributor and ROWI, an appliance shop strong in consumer credits that intends to focus more on the sale of Deep Freezers.
“It is our intention to make the prices of refrigerators affordable in the long term after the end of the scheme.
“We are therefore working hard to attract investment in the local manufacture of refrigerating appliances. This we expect will reduce the price of new refrigerators further and also create jobs for the teeming youth,” Dr. Ahenkorah said.
Dr. Ahenkorah said the contribution of the project to the environmental cause is also tremendous.
All inefficient and environmentally dangerous refrigerators swapped under the rebate scheme are sent to the City Waste Management Company (CWMC) for proper disposal.
The company has imported specialized equipment just for recovering the banned CFC refrigerants, which are still running in refrigerators in most homes.
“These refrigerants are 2,400 times more destructive than the carbon dioxide emissions and are also the major cause of Ozone Layer Depletion.
“Discussions have started between the Energy Commission, EPA, CWMC and Scrap Dealers Association on how we can sanitize the scrapping of the refrigerators to avoid burning the cables and crude methods employed in the scrapping process,” Dr. Ahenkorah said.