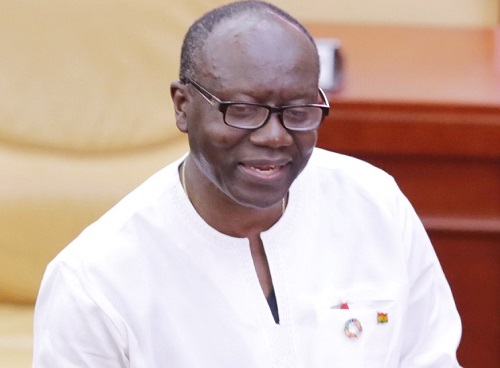 Finance Minister Ken Ofori-Atta has indicated that the Mid-Year Review of estimates would focus on programs aimed at fast-tracking the country’s economic recovery.

According to him, he hopes to use the presentation to extend some support to businesses and industries that have been hit badly by COVID-19.

This support, the minister believes, would also aid the recovery of the economy. Mr Ofori-Atta disclosed this on JOYNEWS’ Business Edition of PM EXPRESS which was on the topic: Managing the Economy amid COVID-19.

“We look forward to a whole revitalization programme of agribusiness, manufacturing and then Ghana as a regional hub; and we are not deterred by what we have seen because I think it’s an opportunity to really galvanize new energy and then dig deep into who we are us Adehye3 and that we came to concur.” He said.

Is the finance minister going to review all the Macro Estimates?

The Finance Minister Ken Ofori-Atta is expected to present the Mid-Year Review of Estimates under the country’s financial administration act.

He is therefore required to update parliament on the estimates outlined in that year’s budget which was read in November last year.

Well, finance minister Ken Ofori Atta disclosed that he is going to review all the estimates. This is because the COVID 19, what he set out, revenue, expenditure and inflation would all have to be adjusted.

Based on the 2020 Budget, government was hoping the set of Marco – Economic target that the finance minister rolled out.

• Primary surplus of 0.7 percent of GDP

• Gross International Reserves to cover not less than 3.5 months of imports of goods and services.

However, some have questioned the essence of this supplementary budget, arguing that it’s an avenue for government to spend to win elections. But the minister noted that “My responsibility is how do I find resources to keep these businesses in operation”

That’s really the issue because we have seen the response from our pharmaceutical industry with regards to sanitizers and PPEs that’s hitherto, we were importing.”

There are fears that the supplementary budget would lead to a serious overrun but the Minister disputes that.

He insists the additional spending has come about as a result of the COVID-19 shocks. He, however, maintains that these funds would be directed at very critical sectors that would help fast-track the country’s economic recovery.

Government had always ended the year, spending far more than what it has mobilised in revenue. In a recent interview with Bloomberg News, noted that this year’s review would be far higher than what he initially proposed.

Revenue Mobilization for the next half of this year

The country is expected to lose about 20 billion cedis in revenue as a result of the COVID-19 pandemic. This has forced the government to look at innovative ways to close the gap before the end of this year.

He promised to come up with some innovative ways to deal with the situation before the end of the year. This programs that would be announced in the budget, would go a long way to improve our revenue situation by the end of 2020.

COVID-19 and the economy

The minister maintained that if it had not being the COVID 19, which has eroded some gains, they could have been on track to achieve some full recovery this year.

He, however, maintained that the situation has also presented them with an opportunity to come out with some innovative policies to stabilize the economy.