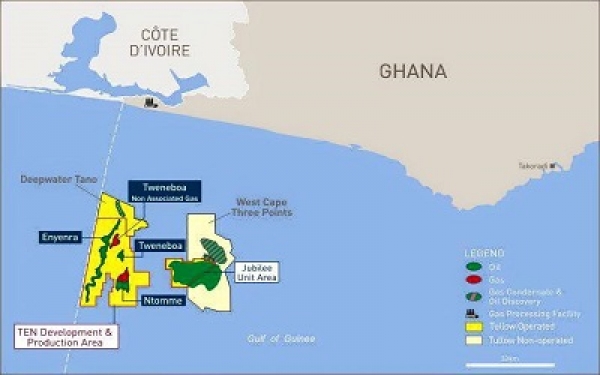 There is an uneasy calm among Ghanaians, especially shareholders of Tweneboa-Enyerra-Ntomme (TEN) project, as the Special Chamber of The International Tribunal on the Law of the Seas (ITLOS) delivers it judgement in the delimitation of the maritime boundary between Ghana and Cote d’Ivoire this Saturday, September 23, 2017.

The ruling is coming 29 months after The Tribunal on April 25, 2015 refused to stop oil companies operating at the disputed area to stop operation, but stopped the drilling of new wells until the final determination of the case.
However, ITLOS ordered Ghana to take all necessary steps to ensure that no new drilling, either by Ghana or under its control, takes place in the disputed area.
The judgement will be read by Judge Boualem Bouguetaia, President of the Special Chamber.
Even though hopes are high for total victory for Ghana, there is an uneasy calm because analysts say several aspects of proceedings in the litigation are novel to the Tribunal, which finds itself in unchartered waters.
Ghana’s team to depart for Germany
Ghana’s team, headed by Attorney-General and Minister of Justice Gloria Akuffo, is expected to depart for Germany before Friday for the ruling.
Ghana and Cote d’Ivoire have laid claim to the disputed boundary in the Atlantic Ocean, and both countries have, in their arguments, prayed the Special Chamber to rule in their favour.
Cote d’Ivoire is praying The Tribunal to declare that Ghana has moved into its maritime boundary, but Ghana has requested The Tribunal to reject Cote d’Ivoire’s claims and maintain the status quo, which had been respected by both countries for more than four decades.
Possible outcomes and implications
In the event that Ghana’s arguments are upheld and the status quo is maintained, oil production forecasts will be restored.
However, if the court should rule that part of the area in dispute belongs to Cote d’Ivoire, it will have serious ramifications for Ghana’s oil productions, especially the shareholders of TEN.
24 Wells for full-field development
The full-field development consists of around 24 wells, comprising a mixture of water injection, gas injection and production wells.
11 Wells drilled so far
However, 11 wells have been drilled so far comprising five water wells, five oil wells and one gas injection well.
13 Wells to be drilled after ruling
The remaining 13 wells will be drilled after the ITLOS gives its final verdict on the boundary dispute between Ghana and Cote d’Ivoire on Saturday.
50,000 Barrels of crude oil per day
Currently, TEN is producing 50,000 barrels of crude per day from the 80,000-barrels-capacity field.
This means that the halting of the rest of the project affected 30,000 barrels of crude oil.
Areas affected by the ruling
The main projects in the disputed area impacted by the decision are Tweneboa-Enyerra-Ntomme (TEN) discoveries, WAWA and the Hess exploration, where further exploratory drilling is required in both the WAWA and Hess holdings in order to fully determine the extent of reserves.
Impact on investment planning
The almost three-year delay, which halted data gathering or analysis, has adverse effects on the investment planning for the full appraisal of these fields.
Impact of field developers
The 29-month litigation period, which halted drilling of new wells, placed huge stress on Tullow’s farm-down, and the partners’ independent fundraising efforts to develop a field that is costing nearly 20% more to develop than the ‘world-class’ Jubilee field, but is projected to produce less than 70% of Jubilee’s performance.
Implication on revenue flow
Ghana, a recipient of taxes and royalties, as well as the shareholders entitled to proceeds from drilling were negatively impacted, as revenue that would have accrued had to be postponed.
10 Failed negotiation attempts
After 10 failed negotiation attempts, Ghana, in September 2014, announced it had instituted arbitration proceedings at ITLOS to ensure the resolution of its maritime boundary dispute with Cote d’Ivoire.
Hearing of the merits in the dispute concerning the delimitation of maritime boundary between Ghana and Cote d’Ivoire came to an end on February 16, 2017 after two weeks of legal tussle between the two countries.
Hearings began on February 6, 2017
The hearing of the merits began on February 6, 2017 and ended on February 16, 2017.
Both countries, with the help of local and international lawyers, advanced legal and technical arguments in their bid to convince the tribunal to hold in their favour.
In accordance with Article 3(a) of Annex VII, Ghana appointed Judge Thomas Mensah, former President of ITLOS, as a member of The Tribunal.
The first round of preliminary hearing began in March 2015, where Cote d’Ivoire prayed the tribunal to stop all activities at the disputed area, but Ghana led evidence to prove why activities at the disputed area could not be halted.
TEN shareholders
The shareholders in the TEN project are Tullow – 47.185%, Ghana National Petroleum Corporation (GNPC) – 15%, Kosmos Energy – 17%, Anadarko Petroleum Corporation – 17%, and PetroSA – 3.815%.
TEN is expected to produce about 300 million barrels of oil, equivalent to 20 years lifespan of the project, and 80% of the oil would be gas.

Africa Starts to Have Second Thoughts About That Chinese Money webmanager July 23, 2020
Close
Business World Ghana
Proudly powered by WordPress Theme: Magad.
We use cookies for functional and analytic purposes to ensure that we give you the best experience on our website. By using this website, we assume that you give your consent to this policy.Ok