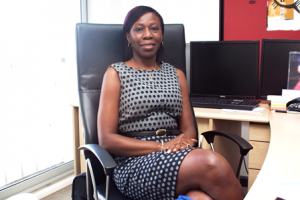 …not in loud words, but in great deeds

Mrs. Mansa Nettey, Standard Chartered Ghana’s Wholesale Bank Co-Head, and Head of Global Markets, is by nature not given to talking about herself and her achievements.

“I struggle to talk about myself, but I also realise it is good to proclaim your achievements every once in a while; if only to inspire and motivate others to be optimistic about themselves and their dreams,” Mansa says.

And if there is anything Mansa has in spades, it is optimism. She entered banking with a plan to beat a rapid track to the peak and perhaps move on to other things; however, as fate would have it, a near-fatal illness almost upended her plans but for her positive outlook on life.

“So I think, having gone through that experience and coming out of it, has toughened me and helped me to be more focused. When I’m confronted with tough challenges, I do not get perturbed.

“In addition to being an optimist and being focused, I think that personally, I’m a very determined person and I persevere in what I set my mind to doing. No is not in my dictionary,” Mansa says of what she believes has driven her to excel in an obviously tough corporate environment and helped her contribute to Standard Chartered’s success story.

Leading the sales team, a key achievement was in developing the financial market in Ghana, which of course is something Standard Chartered is continuing to do, but especially noteworthy was the successful introduction of derivatives unto the Ghanaian terrain.

In the early 2000s, derivative instruments were a sort of taboo in Ghana’s financial sector owing to problems Ashanti Goldfields had with hedging. In 1999, the company succumbed to an ill-executed gold price hedge, led by Goldman Sachs, which drove it to the brink of bankruptcy.

“We had to spend time educating people, and even getting government to do the first derivative hedge. So those were the sort of market developments I would say was one of my key achievements, apart from other achievements internally within Standard Chartered. It is the sort of thing we would like to refer to as ‘Thought Leadership’” Mansa says.

Mansa acknowledges that being a woman in a corporate setting comes with its special challenges.

“I’m a family woman and I have had to combine family life with work; it is a tough balancing act. I have sometimes had to make up for office work even on holidays, but basically if you are determined to succeed at both, you will,” she says with an obvious air of achievement.

Of course, driven constantly forward by her unfailing, unrelenting resolve, Mansa has climbed higher up the corporate ladder; and it is as instructive as it is inspiring how this journey began and panned out slowly, yet not always so surely.

“I always wanted to be in the medical field, so I came out as a pharmacist from the university. I practiced for a little bit but I felt pharmacy, as it was practiced in Ghana, wasn’t challenging enough, though the pharmacy course itself was quite daunting.

That was when she decided to get an MBA from the Manchester Business School, hoping to come back and work in a leadership position in the pharmaceutical space. However, she subsequently realised that opportunities for pharmacists in corporate Ghana were rather limited;

“You either work at the hospital pharmacy or the community pharmacy. There are very few big international pharmaceutical firms in Ghana,” Mansa notes

So after her MBA and determined to come back and work in Ghana, she initially started with PriceWaterHouseCoopers, Ghana.

“I did a short stint with them but then again, I felt I didn’t want a career in consultancy, realising that in consultancy, if you’re not a specialist in anything, your career progression was not expansive; so I tried banking to kind of practice my MBA skills.”

As a lady in the obviously tough, male-dominated corporate environment of Ghana, Mansa thinks she was fortunate to have found herself at Standard Chartered Bank.

“Standard Chartered, as an organisation, tries to offer opportunities for both women and men; it doesn’t really seem to have a gender-biased work environment. Here, it is equal opportunity for all…we have a special culture; a diversity inclusion policy to ensure that everybody has equal opportunity,” Mansa offers.

But she also acknowledges that in every journey, there are challenges. “When I started my career, I had a plan; not to stay for too long in banking but to rise as fast as I could. Fate of course played its hand against my plan when I fell ill and was out of work for about a couple of years, which took a toll on my career. My whole plan was thrown out of gear.

“I expected to be the Head of Treasury by a certain time but because I had fallen ill, it changed things,” Mansa recalls, howbeit without a hint of regret.

Ironically, the very illness that could have ended her dreams, if not her life, gave her the opportunity to demonstrate her optimism about life and her determination to consistently punch above her weight, when she set up what she calls the Leukemia Project Foundation.

“It is to help with the treatment of leukemia, lymphoma and other blood-related cancers because there is a big challenge there right now. At Korle-Bu they do their best but they are limited in terms of equipment and other resources,” Mansa explained.

“I work very closely with some of the doctors there and I’m looking to set up a cancer centre because the treatment costs presently are very high and many lives are lost to these illnesses because people can barely afford the expensive treatment. If we are able to set up a cancer treatment centre in Ghana, we will be able to save a lot of lives. It is a fatal illness if you don’t get treatment. Fortunately there are quite a few people complementing my work,” she says with an obvious air of gratitude.

“So it’s one of the things I’m proudly working on and hopefully I’ll realise my dream and set up the transplant centre,” Mansa says in a calm but unmistakably determined voice.

Mansa believes that the glass ceiling has been seriously breached in recent times and a lot more women now have the opportunity to prove their mettle.

“I have been doing a bit of research on that and statistics show that a lot more women are taking up leadership positions; globally, we have a few female presidents, as in South Korea and other countries.

“About 25% of top corporate leadership positions are held by women globally, and in China for instance, which until very recently was male dominated; there has been a sharp increase in women in senior management of up to 25%,” Mansa disclosed.

This, she thinks, is a positive development and to ensure that that glass ceiling is no longer there, there will be the need to ensure that more women continue to take up leadership positions.

“Globally, there is that awareness and growing willingness to accept women in top positions; and the statistics can show that there has been a shift in that direction

“In Ghana, obviously we are seeing more opportunities given to women in government and in politics generally, where they are assigned key roles. And these women have been delivering; they have demonstrated great experience and ability at multi-tasking.

She notes that in corporate Ghana, as well, increasing numbers of women are taking up topmost positions and in other strategic positions supporting their CEOs and excelling at what they do.

“I believe women have demonstrated that we are capable; that gives us hope of a bright future,” Mansa quipped.