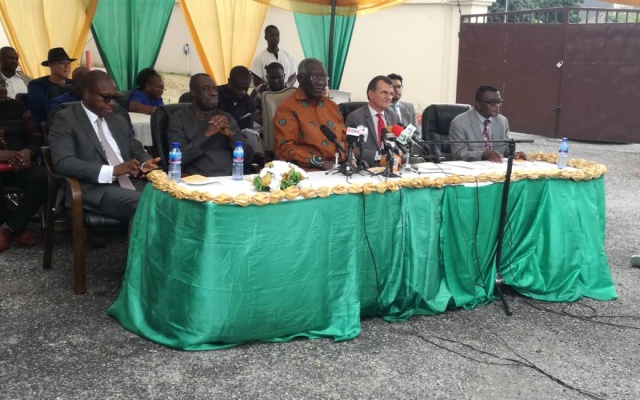 The John Agyekum Kufuor Foundation has inducted the first batch of young entrepreneurs into the Kufuor Young Entrepreneurs Network (K-YEN) to support young entrepreneurs in the country.K-YEN seeks to support young entrepreneurs in developing their skills in finance, business and leadership.Fifteen young people were inducted into the network in Accra on Thursday, 27 September 2018.Speaking at the launch, Chairman of the JAK Foundation, former President John Agyekum Kufuor said K-YEN will support beneficiary businesses to succeed.He said: “I’m here to inaugurate another flagship initiative of the JAK Foundation, the Kufuor Young Entrepreneurs Network (K-YEN). As you’ve already been told, 15 entrepreneurs in the various fields of endeavour have been enrolled as pioneers of the programme.“They are going to be groomed to become the future captains of industry in our nation Ghana like their colleagues in the Scholars Programme. I look forward to seeing a new breed of business leaders who will help to sustain the country’s economic business.”Mr Kufuor said his experience in life has taught him that one key deficit in Ghana’s development efforts is leadership in all spheres of life.He said transformational leaders are needed in governance and business “to successfully develop our society; that is why as soon as I retired as president, I founded the foundation to advance my vision for preparing young people for leadership.”Mr Kufuor said he was happy K-YEN had been formed to help prepare the future leaders of Ghana and Africa at large.The former president said going through the brochure of the 15 inductees, he found that the young entrepreneurs show great promise. He said with a planned empowerment programme, including mentoring, coaching and access to funding, they would emerge as true leaders of industry in the not-too-distant future.To the inductees, Mr Kufuor said: “The foundation will offer you opportunities to enhance your organisational development, teach you best business practices, and give you access to finance and respect for the legal environment.”