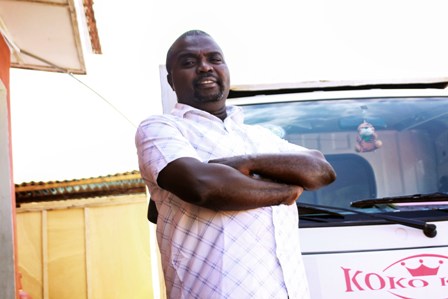 The passion of Albert Osei, the man behind Koko King, for food packaging, has revolutionized the traditional koko breakfast for many of Accra’s professionals. The local porridge, koko now comes in more auspicious packaging and for a little over a one Ghana cedi, professionals can purchase a full breakfast of bread, sugar, milk and of course, koko, properly and healthily packaged and delivered to their workplaces.

Mr Osei’s evolution to become the man behind koko’s latest iteration follows an unusual trajectory. After earning, a Masters degree in Finance from a prestigious university in the United Kingdom, he spent some time working for the Royal Bank of Scotland. Like many other Ghanaians abroad, his dream was to come back home and set up a business. While his business concept had not been fully developed, he was reasonably certain it would involve packaging.

When he eventually made his move back home to Ghana, Mr Osei scouted the market to determine the shape his business would take. As a fan of the porridge, Mr. Osei was drawn to koko. His plans to transform the koko ‘industry’ began to evolve as he studied the market.

“Hausa koko caught my eye because it was a basic thing to cook and deliver to customers. It was also something that I loved and I used to buy it every morning, just like everyone else. So it struck me that this was something that we could do. We could change it and make it better. I am sure I was not the first or only person to think that. I believe thousands of people have looked at Hausa koko and thought that the delivery could be improved. So I think the most important thing I did, was to try it; it was to have a go and see whether the market was ready.”

Meanwhile, pressure was building from family and friends who thought he was insane to ignore offers from banks and other “reputable” institutions and to seek to risk his comfort and livelihood on what may have seemed to be little more than a pursuit of passion with dubious benefit.

“In fact, I had second thoughts at some point, as you do when people are bombarding you. Everybody who has gone into private business will recognize that feeling. But then I thought that if I went into a paid job, it would be very difficult for me to come out and do this. I knew that if I got used to the perks and the comfort of an assured income, it would be extremely difficult for me to come out and pursue this dream I had; this burning desire to package local foods. So I decided to sweat it out. And sweat it out we did.”

In October 2007, Koko King was registered. November to January 2008 was spent on market and production research. A firm believer in standards, Mr Osei had to be sure that he would be available to deliver and exceed the current standards in the market.

The result was the assembling of a three man team – a cook, a driver/salesman and the King himself operating out of a backyard that they had fitted out to fit the required health and safety standards.

Soon, it was time to actually hit the market.

“We did a trial at Millicom from an ice chest in an open car booth. We didn’t have branded cups, then. We did that for a month, selling at a cedi for a cup and some bread. We saw the interest in Tigo. People were buying it. We’d sell 20-30 cups a day. From there we moved to Amal Bank [now Bank of Africa] at Adabraka. That took off, too and they referred us to other companies and we moved on from there.” Koko King was born and it has never looked back.

Naturally, the early years were challenging. Mr Osei says the company only broke even sometime into its third year. This has required perseverance that he believes is critical to the survival of not only his business but businesses, generally. “There is a strong desire to make it work so we find solutions to all the issues. Our mission is to build a brand. We didn’t come to it with the view to just sell koko; we knew we were building a complete brand. So we took a long term view. We knew it would take us at least 5-6 years to build a sustainable brand so at the moment, we don’t even think we are there yet.”

To build this strong and sustainable brand, Mr Osei relies on the strength of the product and the satisfaction of customers. At the moment, while concentrating on capacity building, Koko King has shunned mass media advertising while ensuring that the clients they have are pleased enough to recommend the products to others. And that is basically how Koko King has grown. That and leaflets, office visits and samples. Koko King has been built purely on direct marketing and word of mouth, Mr Osei says. “That is essential to what we believe is the foundation of a solid brand.”

Solid is an appropriate adjective for the business that Mr Osei has built. While selling koko may be some distance from the gilded offices of investment and finance, he hasn’t left his guiding principles behind. He brings an inflexible discipline to the running of his business. While some may have done otherwise, he has studiously refused to invest the returns on his own comfort. He drives a small Tata van that is also a company car.

“You can’t use the small money you are getting to buy cars and land for yourself. You have to invest in the company. You have to invest in your workers, hire the right people, invest in storage, etc in order to build a strong sustainable business.” That discipline is paying off. The firm’s capacity is improving. They operate out of expanded premises and the company’s cars, obvious brand ambassadors, are now becoming recognizable images in Accra’s cityscape.

The banks are beginning to take notice and smiling at Koko King, albeit cautiously.Just two years ago, the story was a little different. “Two years ago, we were struggling to cover our wages around Christmas but the banks wouldn’t help us. We had had a delayed shipment and were thus in a difficult situation and this could have killed us. In the end, it was a friend who stepped in with some money to enable us met our commitments.” That is only one of the challenges. “I think getting the right people is the biggest challenge. …….. If you can get the right staff, then you are on to something.”

Koko King now employs in the region of a hundred people at various levels of the business. Perhaps, with the business growing, Mr Osei must be on to something. To engender small business growth, Mr Osei suggests that government eases taxes on raw materials; grants to help in buying some products and equipmentto enable price maintenance and also encourage them to employ more people. For Koko King, though, the growth has only just begun. The brand is in its infancy and Mr Osei has admirably great ambition for his company. With his eyes firmly set on building a franchise comparable to Kentucky Fried Chicken or McDonald’s in Ghana, he knows he cannot rest until, well, he can rest. To him, that is the ultimate measure of success.

“I don’t quite see myself as successful. I see myself as making a difference. Success would be when the company is able to run on its own. When in five years you come and see that the company is running well without me, then maybe we can call it a success.” Till that happy day, Albert Osei is quite happy to enjoy what he is doing.

“I love to deal with the customers. They call me and we interact all the time. They give us praise and when they are unhappy, they tell me, too. To date, I take care of customer service myself; I don’t allow anyone else to do that and I encourage customers to contact me directly whenever they want to.  Customer service and standards, that’s what I do.”

For a King, that may be an unconventional, yet endearing way to handle his business.