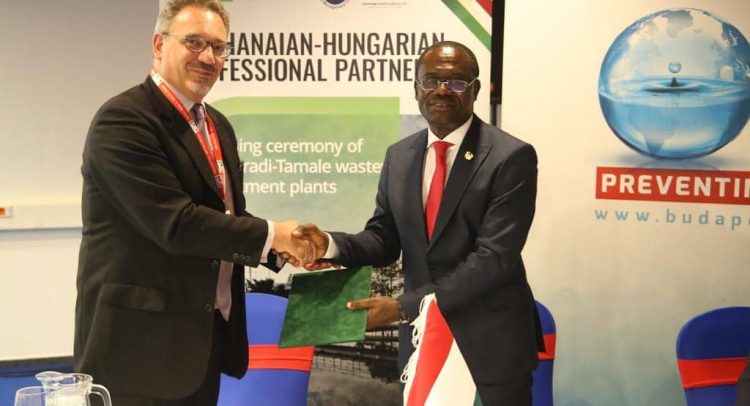 The Jospong Group of Companies, with the help of the Hungarian Government, has secured a facility for various developmental projects in Ghana.

Together with its Hungarian Partners, Pureco, the Jospong group concluded discussions and signed a €20.2 million Euros contract that will see the construction of the Takoradi and Tamale Waste Water Treatment Plants.

The plants are to treat wastewater from faecal waste into reusable water in these two cities.

An additional € 100,000 Euros Grant was signed for the Zoomlion Foundation for the implementation of the Pureco Education Partnership Project (PEP Project)

The Plants to be constructed in Takoradi and Tamale would be managed by Sewerage Systems Ghana Limited (SSGL), a subsidiary of the Jospong Group and would have the capacity to treat 1,000m3 of waste water every day.

The Takoradi and Tamale water treatment plants when completed are expected to create about 1,000 direct and indirect jobs in each city where Faecal waste treatment facilities are currently nonexistent.

Speaking at the signing ceremony which was held in Budapest, Hungary, the Executive Chairman of the Jospong Group, Dr. Joseph Siaw Agyepong, thanked the Governments of Ghana and Hungary for their various roles in securing the facility.

He also thanked the partners from Pureco for their partnership that is fostering Development and improving the lives of people in Ghana.

In attendance was Ghana’s Minister for Sanitation and Water Resources, Cecilia Abena Dapaah who reassured the Government of Hungary of their support as a Government and pledged to supervise the activities of the Jospong Group to ensure that the projects are executed to the satisfaction of both Governments.

The Minister congratulated the Jospong Group for such a great achievement and encouraged the Group to continue to raise the flag of Ghana high both locally and internationally.

Speaking on the partnership, István Joó, Deputy State Secretary for Export Development at the Hungarian Ministry of Foreign Affairs, said “Considering the transformations taking place globally and the increase in Public Private Partnerships to bring about Development, this collaboration will be a win-win situation for not just both companies but for both countries.”