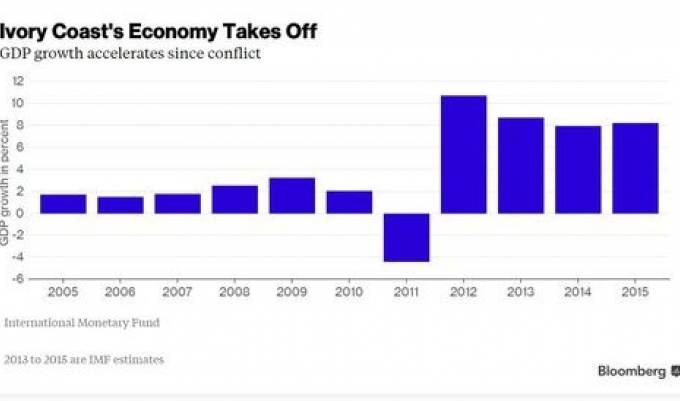 President Alassane Ouattara said Ivory Coast aims to produce half of the world’s cocoa by 2020 and that he won’t make the mistake of overwhelming the nation with debt to sustain growth like other nations in Africa.

“We will continue to boost our production, there is no limit,” Ouattara, 73, said in an interview in his office in Abidjan, the commercial capital, on Wednesday following his landslide re-election on Oct. 25. “I hope we can surpass 50 percent of global production in 2020 while continuing to improve the quality.”

The nation’s share of global output will rise from about 45 percent now, Ouattara said. Ivory Coast is the world’s largest producer of cocoa and had a record crop of about 1.8 million tons in the 2014-2015 season.

Ouattara took office in 2011, inheriting an economy that had collapsed. Since then, the economy has rebounded, expanding at almost 10 percent this year and drawing investors like French supermarket chain Carrefour SA, which is set to open its first sub-Saharan African store in Abidjan this year.

The former economist sheltered in a hotel for five months after President Laurent Gbagbo refused to acknowledge defeat in a 2010 election. The stalemate triggered a civil war that left more than 3,000 people dead and halted cocoa exports.

Ouattara, who earlier in his career had been barred from running because he was considered a foreigner, won 84 percent of the vote on Oct. 25, avoiding a runoff. Opposition leader Pascal Affi N’Guessan, his closest rival, conceded defeat after the electoral commission published the results.

“It’s the first time in a quarter of a century that we have had no violence during an election,” Ouattara said. “That means that we’ve turned the page of the 2010 crisis and now we can focus on what’s really important: improving the daily life of Ivorians.”

Since 2011, the government has approved large infrastructure projects such as highways and dams, and overseen the construction of a toll bridge that has cut traffic jams in Abidjan. It also guaranteed cocoa farmers a minimum price for their harvest and raised the minimum wage for other workers to 60,000 CFA francs ($98) from 36,000 francs.

Ouattara said one of his priorities for the next five years is to increase domestic processing of its biggest exports, cocoa and cashew nuts. Ivory Coast is also the largest African exporter of bananas. “I want to work on transforming the Ivorian economy,”he said. “We’re an agricultural economy, but we need to step up processing of our crops and even move toward industrialization.”

The economy is forecast to expand by as much as 9 percent annually through 2020, a pace that is more than twice as fast as the average in sub-Saharan Africa, driven by household consumption, investment and exports, Ouattara said. Commodity-rich nations on the continent are slashing budgets and trying to raise money on debt markets to plug revenue gaps from falling prices for exports such as oil and copper.

Investors have reacted positively to Ouattara’s win. “Some people expected elections to be not as peaceful as they actually were,” Ayso van Eysinga, West Africa researcher at Eurasia Group, said by phone from New York. “Now that we are not seeing any violence following the elections, the opposition isn’t calling for protests, the market is pricing in more stability and less risk.”

The opposition says that high growth hasn’t benefited poor people and that social divisions have deepened. Ouattara said he has invested in schools and hospitals, and plans to increase access to drinking water and electricity in rural areas.

The debt to gross domestic product ratio will be 40 percent to 50 percent from about 43 percent, he said. Ivory Coast’s neighbor Ghana has a ratio of about 62 percent and is struggling to reduce some of the highest borrowing costs on the continent. Ouattara said he will raise as much as 20 trillion francs in public and private investment through 2020 to fund development projects.

“We’ve become very efficient in mobilizing foreign resources, and we will do that while maintaining the debt to GDP ratio,” he said. “We don’t want to overload Ivory Coast with debt.”