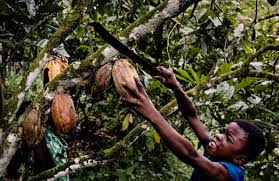 Ivory Coast’s government said it is seeking more assistance from the International Monetary Fund to support the nation’s 2017 budget after cocoa prices slumped, hurting the finances of the world’s biggest grower.

“With cocoa prices falling, we have some new budget constraints,” government spokesman Bruno Kone said by phone from the commercial capital, Abidjan, on Sunday.

Ivory Coast will issue the request as representatives of the IMF visits the West African nation until the first week of April for a review of the country’s three-year extended credit facility agreement of about $660 million. Cocoa futures in London have slumped by about a third since reaching a six-year high in July.

Earlier this year, the government tried to defuse military and social unrest by agreeing to pay bonuses to soldiers and made some concessions to civil servants who led a strike earlier this year.

Ivory Coast’s budget deficit will probably widen to 5 percent of gross domestic product this year, compared with government estimates of 3.9 percent for 2016, according Renaissance Capital. The country will soon sell Eurobonds in its first issuance of international debt since 2015, Finance Minister Adama Kone said March 22.