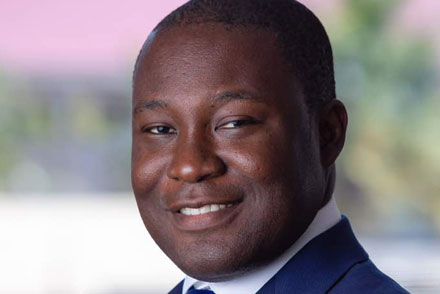 The idea of running a business had always enthused Nana Osei Kwasi Afrifa since University days.

His frenetic interest for business was fuelled by a strong will to be self-reliant and the desire to create great products that people would be willing to pay for.

Currently, he is pursuing a more ambitious goal to develop solutions to improve lives and increase the company’s portfolio to become a billion dollar conglomerate in Africa by 2035.

But the journey towards such a goal didn’t start today.

Back on the campus of Kwame Nkrumah University of Science & Technology (KNUST) between 2001 to 2005, he started Vokacom with the help of a group of friends as a side hustle.

“The idea of Vokacom emanated from a normal conversation I was having with an insurance manager who was complaining about his inability to access the right software for his work. He asked that I design a software within two weeks and if he likes it, he pays for it,” Kwasi Afrifa said in an interview on the KSM show.

Enterprising as he was, he quickly organised a team and beat a month deadline to submit a software that could help streamline the insurance business.

“We knocked things together and in 3 weeks, we submitted the package to them, he loved it and immediately paid,” he explained.

This lucky break stirred his confidence and caused him to look at the business more seriously.

He registered the company and named it Vokacom enterprise after his uncle because he (uncle) set him on the ICT path by buying him his first computer when his dad espressed disapproval of his career trajectory.

“My father wanted me to be a medical doctor but I wanted to be an IT professional and there was a little tussle as a result till my uncle stepped in and bought me my first computer,” he narrated on the show.

Still on campus, the team saw a ramp up in gigs from referrals leading to building more data-based software for many companies.

At a peak, according to him, they could rake in $1500 dollars a month.

This rising success he explained got a better part of them subsequently veering them off the vision.

In the ensuing months, the company suffered a severe setback.

“That was our peak, we were on top of the world and we weren’t afraid of anybody-we could do whatever we liked.”

Little did he know that his new lifestyle and lack of sound managerial skills was setting him up for a downturn.

In August 2005, reality sets in after he obviously failed to handle the then fledgling business.

“By then, the company completely went bankrupt: we stopped running the business, had no money and so I have to go learn again how to properly run a business”

Luckily for him, he had applied to hitherto telecommunications company, Spacefon, now MTN. He worked there for a while and through time spent there, learnt the rudiments of running a business and sustaining it.

Today, he prides himself with MTN as his biggest client.

Apart from MTN, Vokacom has worked with a cadre of Telecommunications Company in Ghana including AirtelTigo, Vodafone, with clients in the hospitality industry.

If there’s anything that life has taught him on his entrepreneurial journey, it is humility.

“It’s important we know that no matter how far we go or travel, we constantly remember that we came from somewhere,” he said making reference to Vokacom’s formative years in 2011 when his biggest contract paid GH₵5000 a year compared to an annual turnover of $ 10 million now.

He believes that his employees are the drivers of the business and takes keen interest in their wellbeing.

Employees numbering 60 are flown outside the country on yearly retreat to have fun. In 2016, they were in Dubai and in 2017 they converged at South Africa.

In all these, he doesn’t fear competition around his circles because the very tech company CEO (Alex Bram) that inspires him, “competes with me and at the same time work with me and inspires me to get better and do well.”

The company has won several awards over the last two years including Mobile VAS Company of the year, Software Company of the Year, Global SME Award for best business model, 2019 ITU Telecom World Awards among others.

“Cimg Marketing Man of the Year Award; that is the one award I want to win. I don’t know how to get it but I just need to keep working hard and I know one day it will come true,” he concluded