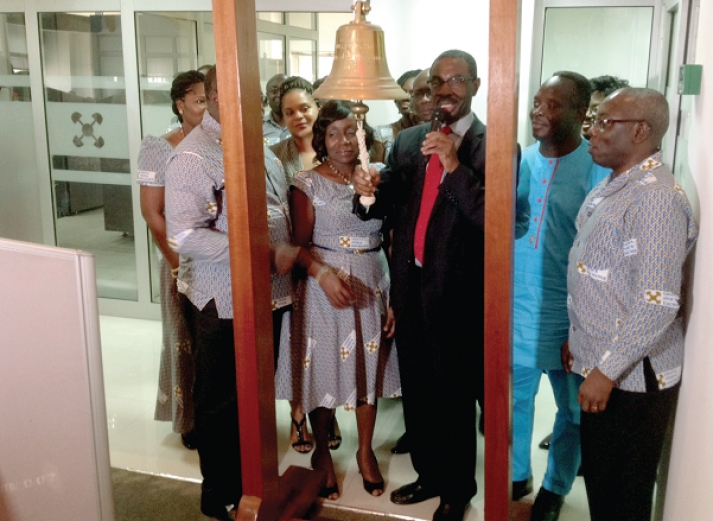 The Managing Director of the Ghana Stock Exchange (GSE), Mr. Kofi Yamoah, has said the refusal of smaller commercial banks to heed to the call to merge will have a negative impact on their fortunes in the long term.

According to him, most of these smaller banks prefer to maintain their current state rather than merging to have what he described as a solid capital base to undertake big ticket projects.

Mr. Yamoah, who spoke in an interview in Accra on the sidelines of the launch of the 25th anniversary celebration of the GSE, said, “My wish is for financial institutions to become bigger.”

Over the years, the Ghana Cocoa Board, for instance, has resorted to the foreign financial markets to raise syndicated funds to finance cocoa purchases locally. This is because the local banks in the country are unable to do so because of their low capital base.

Unlike other jurisdictions, a bank in Ghana requires below GH¢70 million as minimum capital to start operations. This has resulted in the mushrooming of banks in the country.

Presently, with a national population of just over 25 million people, there are about 28 fully licensed commercial banks operating in the country, with a few more yet to receive the green light from the industry regulator.

It is gradually becoming a norm to see savings and loans companies working hard to metamorphose into commercial banks because of the size of the minimum capital required to become a commercial bank.

This unfortunate phenomenon is creating a situation where the local banks are consistently losing profitable deals from the country to foreign banks.

Another unfortunate situation is the fact that much as there are more banks in the country, the savings culture is low, as more than 60 per cent of the population is unbanked.

“It is sad to say that some of these smaller banks want to keep their nature as it is; it is not good for the economy because if they are become bigger they will be able to write bigger deals such as cocoa syndicated loans, oil and so on,” he said.

The 25th anniversary celebration is on the theme “Building resilient markets for developing economy” and will be marked in January 2016.

The symbolic tolling of the bell to mark the 25th anniversary launch was led by the Chairman of the Council of the GSE, Dr. Sam Mensah, with the support of some current and previous members of the GSE Council, as well as the staff of the exchange.

Mr. Yamoah indicated that the GSE was in discussions with other markets to pursue the integration of West African capital markets.

According to him, the ultimate goal of the integration is for the harmonisation of requirements, rules, and procedures.

He said GSE was seen as a small market and the integration with others in the sub-region would ensure greater access to the West African Markets by issuers and investors.

On the past performance of the local bourse, Mr Yamoah said the GSE started in 1990 with 11 securities, representing GH¢3.05 million equity, but the market could now boast  of 40 share securities with a capitalisation of GH¢62 billion.

He noted that companies over the years had raised about GH¢2.1 billion in equity and GH¢194 million in debt securities from the investing public for development.

Again, he said the GSE had on compound basis returned 5,400 per cent to investors compared to a return on dollar investment of 2,900 per cent return based on inflation of 3,100 per cent and return on 91-day treasury bills of 8,100 per cent.

Mr. Yamoah said before the advent of the exchange, investors had to leave their orders with company securities or company registrars and went home to await a counterpart request in order to buy and sell securities in a public company.