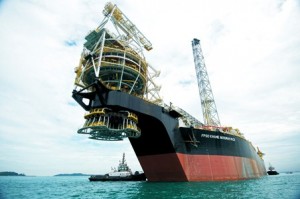 Ghana’s Jubilee oilfield partners have been given the green light by government to proceed with development of the group’s second major deep-water project off the country’s western coast.

Approval of the plan of development (PoD) for the Tweneboa, Enyenra and Ntomme (TEN), , fields revealed Thursday, May 30, paves the way for partners including Kosmos Energy, Tullow Oil, Anadarko, PetroSA, and the Ghana National Petroleum Corporation (GNPC) to proceed with the development of the discoveries.

Tullow’s Chief Executive Officer, Aidan Heavey, said; “I am delighted that the TEN Project Development Plan has been approved by the Government of Ghana. This is an important project that will give Ghana its second major offshore development.”

The TEN project, in the Tullow operated Deep-Water Tano Block, is 60 kilometers (37 miles) offshore Ghana and only 30 kilometres west of the Tullow-operated Jubilee field. It is set for first oil in 2016 with a plateau production rate of 80,000 barrels per day of oil, down from the figure of 100,000 bpd, which many analysts were basing models on earlier.

Currently, the Jubilee Field is nearing plateau production of 120,000 bpd after a series if technical interventions to address challenges with sand blocking flow pipes that limited production to about 80,000bpd in 2012.

The partners are expected to soon award a floating storage, production & offloading (FPSO) contract on foot of the approval, with MODEC and SBM, understood to be the only contenders left for the job.

Development of TEN will require the drilling of up to 24 wells to be tied back to the FPSO in 1,500 metres of water.
“Design work on the FPSO, subsea facilities and the development wells was initiated in 2011 and, following approval of the development plan, major contracts will now be finalised and subsequently awarded,”.

“The award of these contracts will enable Tullow and its partners to build on their commitment to help develop the oil and gas sector in Ghana by expanding local capability and participation in the supply chain, particularly through the in-country fabrication requirement of the TEN Project.” Tullow said in a statement.

It is understood the FPSO contract would be for a converted unit. The value of the FPSO lease is not included in TEN’s $4.5 billion estimated cost.