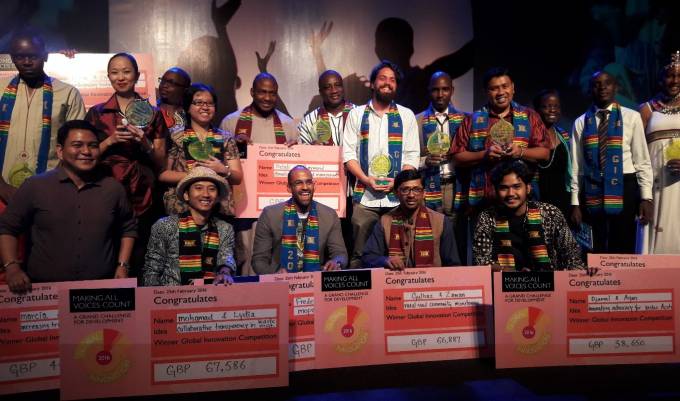 A team of four Ghanaian researchers, together with eight others from different countries across the globe have been awarded £600,000 for emerging winners in the 2016 Global Innovation Competition (GIC).

They were awarded among 15 finalists that participated in a competition that is expected to unearth new ideas to address global challenges.

The annual competition is organised by Making All Voices Count, and seeks innovative and inspirational ideas that address governance, inclusion and accountability in communities.

Out of about 400 participants in the competition, there emerged nine winning teams from different countries including Ghana, Kenya, Pakistan, Indonesia and Uganda.

The team from Ghana took home the highest — £136,800 — of the total amount allocated for the entire group of winners in the competition.

At an event held in Accra to announce the winners, Programme Director-Making All Voices Count, Dr. Fletcher Tembo indicated in an interview that the whole idea of the competition is geared toward discovering technological innovations that can bring about developmental changes.

“These ideas are so innovative that when they are implemented they are able to reach more people and governments in response to issues and bring about change,” Mr. Tembo noted.

He also stressed that those among the finalists who did not get any of the awarded money are not considered losers because “they have very good projects, and if they present their proposals to other donors they will be able to make progress,” he noted.

In an interview with the B&FT, a member of Ghana’s winning team Dr. Raymond Kasei — a lecturer and environmental scientist at the University of Development Studies — said the team’s project seeks to address the flooding disaster that hit Ghana’s capital on June 3, 2015, causing over 150 deaths and loss of properties.

According to Dr. Kasei much of the damage — which was due to poor drainage systems causing the flooding — could have been prevented, and therefore the team decided to come up with a project to address the issue.

The project, titled the ‘Climate Smart Integrated Flood Management’ system, will employ the combination of a simple forecasting and early warning system for citizens with longer-term data gathering around flood-prone areas.

It is expected to provide an information base that supports policymakers, computer scientists and ICT companies to share information and create coordinated flood-response plans for Accra.

Dr. Kasei said: “We will put up some monitoring system where communities will be given capacity building, then we will set thresholds for various communities that we identify and warn these communities through various means of communication”.

The areas of focus in the project, according to the team’s representative, will be Agbogbloshie, Avenor, Odawna and other surrounding neighbourhoods that share the Odaw River in Accra.