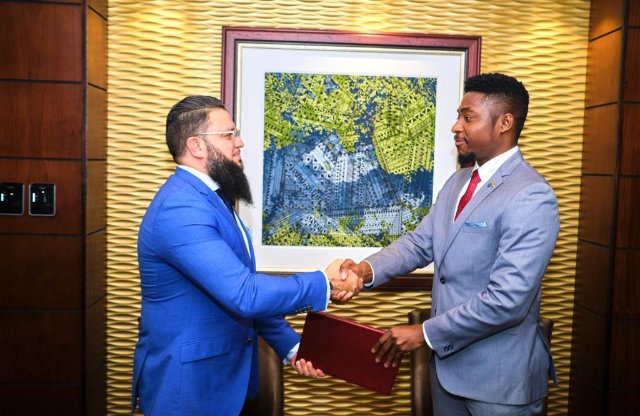 The service when launched will be the first of its kind in the country with the aim of improving the transportation system and making it easy for commuters to move from one place to another.

This was announced during the signing of an MoU between the joint venture partners.

CEO of Trans-Sahara Industries, Gerald Acheampong, told reporters that his company has adopted technology in providing solutions to aid the government and other stakeholders in speeding up the legalisation of commercial motorcycle operations.

He believes this will have an immense economic contribution and help solve the youth unemployment issues in the country.

There have been debates over whether to legalise the Okada operations in the country with some MPs calling for an amendment of the country’s road and traffic laws to allow the motorbikes to work.

Founder of EightD&Co, Kevin El-Hassan, expressed his company’s vision to create world-class financial solutions for the world’s low-income and unbanked market, as the company has also been doing in the South-East Asian market.

“We combine the best technology and customer empathy to design product experiences that drive social impact, economic advances and solve challenges specific to each region,” he said.

At the MoU signing ceremony, the local managing partner the company Ighsaan Jacobs emphasized the commitment of their company for growing their Fintech presence in Ghana and the innate synergies they have with the new partnership with Trans-Sahara Industries.

“Trans-Sahara Industries and its amazing team of young visionaries, represent the very core of what we see as empowering local Ghanaian talent and globalizing their dreams into reality. Indeed we are just scratching the surface of where this partnership will collectively lead us to,” he said.

BluBird Technologies seeks to ease the concerns of government and other stakeholders in the call to legalise such an operation which has become popular.

The BluBird App seeks to give motorcycle, electric bike, and bicycle owners the opportunity to earn an income by simply riding around on their bikes to deliver packages or transporting people through a highly regulated and monitored platform.

The App is designed around customer experience, satisfaction and safety.

BluBird will ensure that riders have motorcycles that pass company inspection and meet regulators quality standards.

Regarding safety, the App will partner Okada riders licensed by the Drivers and Vehicle Licensing Authority (DVLA).

Rides and riders will be assessed for compliance and incentivised by in-app awarded tokens that will translate into higher incomes, he disclosed.

BluBird is also working on a rider training program for all riders on the sharing platform, special training will be provided for females to enable and empower them to become riders in earning a living wage to support their families.