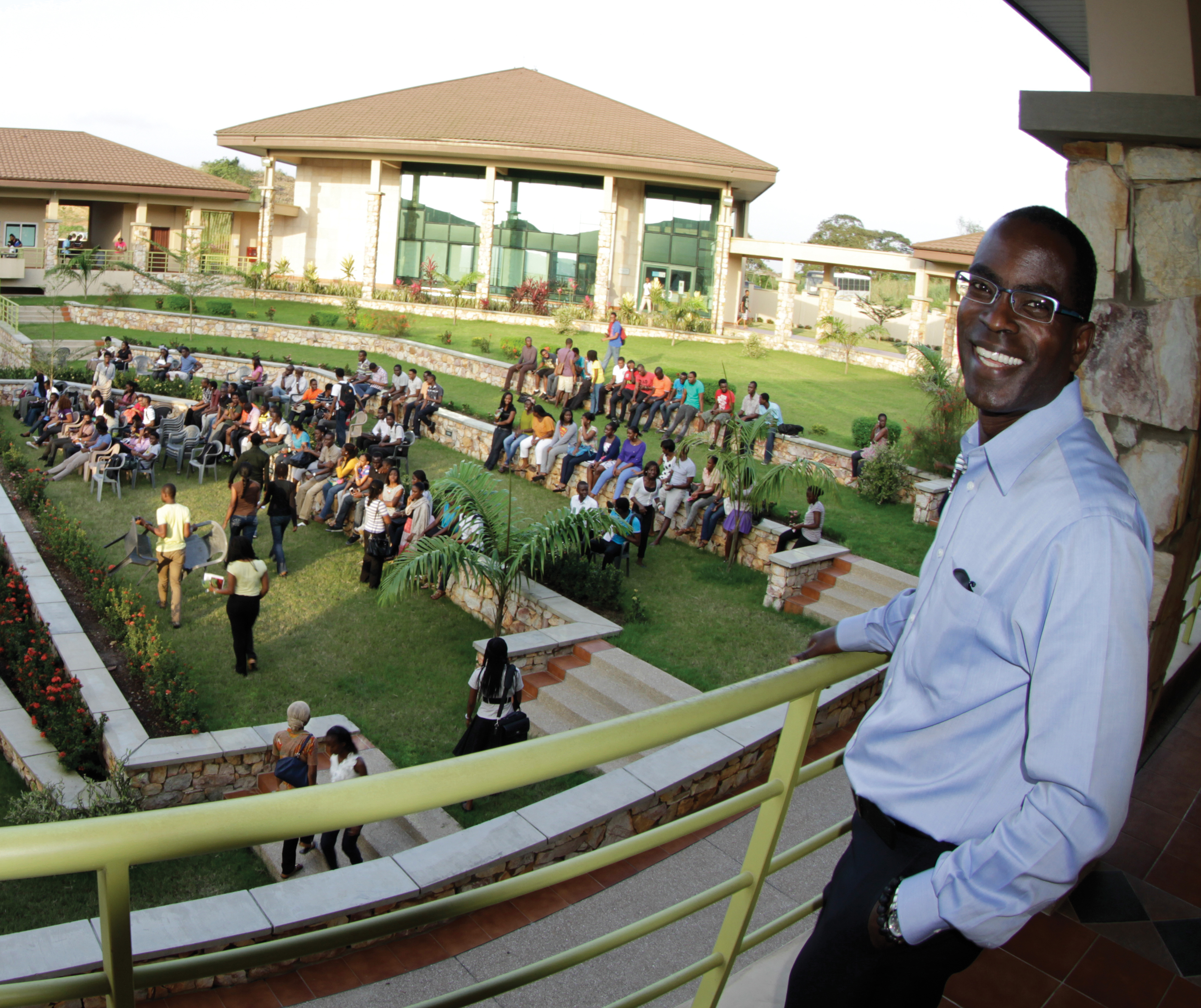 Patrick Awuah is a man on a mission. Or several.

An Engineering and Economics Major from Swarthmore College in the United States Of America, Dr Awuah says he was seized by a desire to come and do something to help his motherland – Ghana – upon the birth of his first child. His enquiries and investigations led him to tertiary education as a sector in which he could contribute. The Microsoft Programme Manager with a reputation for completing challenging projects went back to school to obtain a Masters in Business Administration from UC Haas Berkeley School of Business, built a team and set up the Ashesi University College, now widely acknowledged the premier private university in the country.

Ashesi caught the wave of liberalization in the education sector of the post 90s when government realized that it could not adequately and fully cater for the demands of tertiary education. Consumed by a desire to replicate an Ivy League institution in Ghana to provide a necessary oomph for Africa’s renaissance, Dr Awuah set about building an institution that sought to set new standards and produce a different sort of graduate – creative, visionary, ethical and imbued with leadership qualities.

“I wanted to bring the kind of education I had experienced in the United States to Ghana – to educate people who think critically; have broad perspectives; problem solvers; and who are problem solvers”, he says.

And so far, the record would show that the attempt has been largely successful.

Ashesi’s graduates are very sought after in the difficult jobs market. That is one way, prosaic albeit, to measure the impact of this institution on which so much expectation rests. And not just from its promoters.

“I think a lot of people are taking note of Ashesi”, Dr Awuah says, “because they see what our graduates are doing out there. They get jobs very quickly. Clearly corporate Ghana has recognized that the students that are coming out of here have the quality that they need.”

And if you are counting, of the last graduating class, 92% have had job offers, just months after walking out of the halls.

But for Ashesi, the sights are slightly higher. It is not enough to produce employable graduates; they must also have a certain something: ethics. Given that the other universities, both public and private struggle with this, enduring the odd scandal now and again, it is interesting that Ashesi has chosen to focus on this part of its students’ make-up. Or maybe not. Perhaps, it is not only appropriate, but necessary.

“I think the most profound thing that is happening is a student body that is hardworking; that is making major steps in terms of its expectations of itself with respect to ethics. I think that the Ashesi student as a whole is more concerned about this issue of integrity than the student bodies of other institutions. I think some of the stories we hear about academic dishonesty from some of the campuses are very troubling because cheating in exams is what corruption is to a student. And if students are being corrupt then there is a greater likelihood that they will be corrupt in their professional lives.”

Ten year on,  from its shining new campus in Brekuso, tucked away in the hills off the stretch of road between Peduase and Aburi, Ashesi’s impact can be clearly measured in the numbers and the intangibles. But for the man behind it, there is a wider significance. Through this single phenomenon, Dr Awuah’s impact on Ghanaian society can be felt and will continue to be felt in several areas.

Ashesi’s unique brand of education is one that has been noticed by other players in the tertiary education subsector. While the corporate world is very keen to accommodate its graduates, it is only natural that the competition would notice. And notice, they have. As the sector grows,  we may see new kind of education evolve, one that takes account of the Ashesi model and seeks to produce more rounded graduates that have knowledge of and exposure to other academic disciplines.

Given his experiences a student and then a University don, Dr Awuah’s passion naturally manifests in advocacy for the sector, for reforms in curricula and mode of instruction. It is an advocacy that on occasion has had the commentariat seek to brand him in line with Ghana’s febrile political conversation. While not interested in politics as a calling, he will not shy away from sharing his views with the public, with others in the educational sector and all who seek his opinion.

His efforts have been noticed, culminating in multiple awards including Membership of the Order of Volta and the Millennium Excellence Award for Educational Development.

Ashesi deliberately seeks to create a graduate that, call it what you will, has an entrepreneurial spirit. While that may not always mean them setting up shop themselves, employers have noticed that Ashesi products are more eager to try their hands at solving problems than the average Ghanaian graduate; that they are more innovative; more confident and much less daunted by new challenges.

Behind this is Dr Awuah’s fervent belief in creativity and innovation. The Engineering major explains that “the people who came up with the computer had to go and invent it. If Ghana really wants to advance, we need to educate people who can make breakthroughs, who can achieve new insights about things. We should get their minds out of the box that the educational system puts everybody in.”

An entrepreneur himself, Dr Awuah has been recognized as 8th Most Respected CEO in Ghana (2010) and the Best Entrepreneur in Ghana (also in 2010).

In the African renaissance: Yes, we can

And perhaps, just as important, building an Ivy League institution right here in Ghana sends an important signal to Africans, to the world about the capacity of Africans to aspire and achieve. Convinced of the innate capability of Africans and the adequacy of the human and material resources available to them, the impossibility of this enormous task, given the challenges, was never entertained in his mind.

“We have the same intellectual capability as anyone else. It’s just a matter of whether we have the will and determination to get it done. In any case, I think that it is necessary.”

And that is not only a declaration, but a challenge to all Ghanaians and Africans from the 2009 Microsoft Alumni Foundation Fellow, voted one of the 100 Most Creative People in Business by Fast Company in 2010. And it is a challenge that must be accepted by all people in all areas of endeavour if the desirable African Renaissance is to take off and endure. In his own words, “Ghana really needs that. It needs people who are focused in the various disciplines, which experiences can then be pooled together to move it forward.”