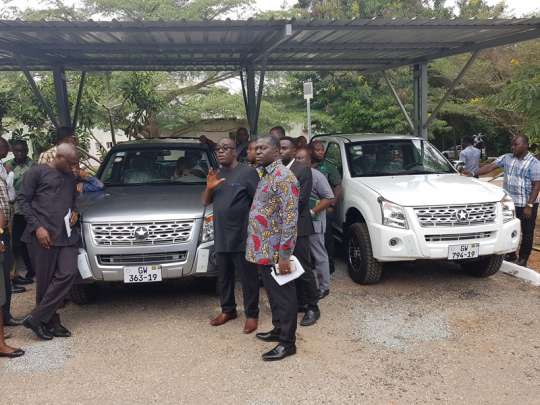 The Forestry Commission of Ghana, in line with government’s quest to promote local content and the use of made in Ghana products, has acquired two double cabin pick-up vehicles manufactured by Kantanka Automobile Limited.

The vehicles, manufactured by Kantanka Automobile Limited, Ghana’s only indigenous car manufacturing company, are to augment the Commission’s fleet of operational cars and there are plans to purchase two additional ones.

Mr Kwadwo Owusu-Afriyie, Chief Executive Officer of the Forestry Commission, said the move is in furtherance of government’s agenda to promote made-in-Ghana products.

He said countries that have grown their economies from third to first world have done so advancing policies that encouraged the patronage of indigenous products and services.

Mr Owusu-Afriyie said for example Korea has become an automobile giant due to initial policies that encouraged citizens to patronize made in Korea cars.

He said Government of Ghana has over the past few years also initiated policy measures aimed at reviving and growing local businesses in the country.

Mr Owusu-Afriyie said these include the introduction of new strategic anchor industrial initiatives to create new growth poles for the Ghanaian economy and promote small and medium-scale enterprise development.

Others include the establishment of an industrial sub-contracting arrangement that has the ultimate aim of improving domestic retail trade and promote domestically manufactured goods, he said.