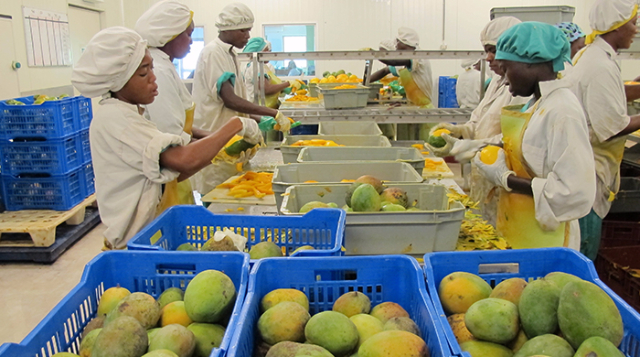 Two new reports released by the Ghana Export Promotion Authority a fortnight ago suggest that nontraditional exporters from Ghana take advantage of major under exploited foreign market opportunities in both fresh mangoes and cashew kernels.

GEPA’s latest reports have come at a time the Authority is striving to facilitate the doubling of the country’s revenues from non-traditional exports (NTEs) to US$5 billion by 2022, up from about US$2.45 billion currently.

One of the research driven reports reveals that Ghana exported US$36.4 million worth of fresh mangoes in 2017, representing 1.4 percent of global exports and making the country the 16th largest exporter of the product in the world. GEPA notes that the United Kingdom is Ghana’s biggest export market for fresh mangoes buying up US$22.1 million worth of the product in 2017.This has made Ghana the second largest exporter of fresh mangos to the UK behind Brazil at US$ 31.87 million, but having overtaken Peru with US$19.6 million last year.

Instructively though, despite Ghana enjoying duty free access to the UK because of the recently signed Economic Partnership Agreement with the European Union, its sales of fresh mangoes to the UK fell marginally by one percent last year. But sales growth potentials are strong; in 2017 India increased its sales of mangoes to the    UK by 54 percent, the United States increased by 77 percent and Pakistan increased by 26 percent.

Ghana is already well ahead of its West African neighbours; in 2017 its closest sub regional rival in mango sales to the UK was Cote d’Ivoire with US$3.3 million, followed by Burkina Faso with US$2.8 million.  GEPA officials reckon that Ghana could conceivably double its mango exports to the UK if it can raise its product quality, since actual production capacity could easily accommodate this.

The other new report identifies cashew kernels as a major NTE opportunity. Ghana exported some US$17.853 million worth of the product in 2017, with 41 percent of this going to the US, which is easily the world’s largest market, importing US$1.581 billion of the product in 2017. This translated to Ghana having just 0.5 percent share of the American market.

Vietnam has a commanding 75.8 percent share of the enormous US market but GEPA officials are confident that Ghana has strong potentials awaiting actual exploitation. Instructively, neighbouring Benin Republic exported US$16.37 million worth of cashew kernels to the US last year, which is more than double Ghana’s US$7.3 million in sales to that country for 2017. Mozambique did even better selling US$22.582 million to America last year.

Just as with fresh mangoes this indicates that Ghana could easily double its exports of cashew kernels although its supply constraints with regards to the former include production volumes rather than quality.

However, agriculturalists point out that Benin Republic has achieved its export volume to the US with the same climate and similar soil as Ghana has.